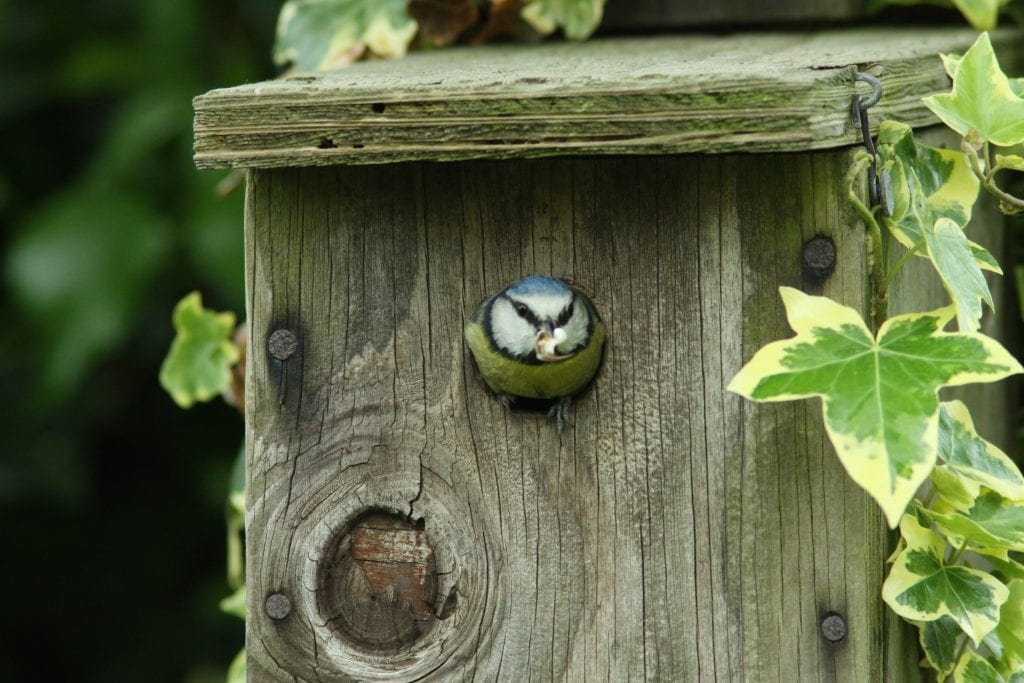 See the tabs below for answers to the most frequently asked questions we get about putting up nestboxes in your garden, farm or local area. Below this FAQ we’ve also got a guide to the different types of nestboxes that you might want to consider for your garden, as well as links to where you can buy them from our shop.

Nestboxes for your garden

Frequently asked questions about bird nestboxes and putting them up in your garden.

What birds will use my nestbox?

That depends on the type of nestbox you have. If you have a ‘traditional’ type of nestbox then it depends on the size of the entrance hole: Blue Tit and Coal Tit will use nestboxes with a 25mm diameter hole, Great Tit and Tree Sparrow will use it if it has a hole of 28mm and House Sparrows use nestboxes with entrances of 32mm diameter. House Sparrows will also used ‘terraced’ nestboxes – which are essentially two or three nestboxes joined together. Starlings will use nestboxes if they have an entrance of 45mm and are around 25-30% bigger than the average nestbox.

If you have an open-fronted nestbox then it might attract Blackbirds, Robins or Wrens to nest. Blackbirds require a mostly-open front, Robins are okay with something half open, and Wrens will use something a bit more closed up.

In addition to the ‘traditional’ style of nestbox there are specialist nestboxes available for species like Treecreeper, Jackdaw, Barn Owl, Kestrel, Grey Wagtail, Dipper, Swallow, House Martin and Swift.

See the BirdWatch Ireland shop here for a variety of different types of nestboxes.

How high should I put my nestbox?

Many people put their nestboxes up too high – really you want it 2-4m off the ground if it’s a nestbox with a hole. Something around 2m up should be fine once there’s no way for cats to get near it. The exception is for open-fronted nestboxes for Robins, Wrens and Blackbirds which should be lower than 2m but amongst dense vegetation and somewhere cats and other predators won’t easily see or access it.

If you’re attaching it to a tree, don’t drill or nail it as this will damage the tree, but instead use a wire strap wrapped around the tree.

How can I choose the right location for my nestbox?

Firstly, make sure it’s facing a direction where it’s not going to bear the brunt of wind, rain or strong sunshine – facing between north and south-east is usually best, though there’s some flexibility here if it’s in a sheltered corner of the garden/house. Tilt the box forward slightly so any rain will run off the top, and a nestbox with some small holes for drainage in the bottom are preferable too – just in case.

After that, somewhere with some surrounding vegetation (ivy, brambles, shrubs, trees) is ideal, but make sure the birds have a clear flight path to access the nestbox hole. For Starlings and House Sparrows (and occasionally other species), boxes placed under the eaves of your house or shed should work well.

Lastly – don’t put your nestbox beside where you feed your birds as any birds looking to nest will waste a lot of energy trying to fend off intruders into their territory!

How can I tell if my nestbox is being used?

The best way to tell if your nestbox is being used is to keep a watchful eye from as far away as possible. If you’re standing too close, the parent birds won’t want to give away the location of their nest to a potential predator (i.e. you!), so they won’t fly in. If you open the nestbox there’s a risk that the adults will abandon it – this can happen during nest construction, egg incubation and even chick raising, so don’t risk it! You should never take down a nestbox during the breeding season (i.e. start March – end September) as there may be birds using it without you knowing!

There are a variety of nestbox cameras on the market which allow you to see whats happening in  your nestbox without disturbing the birds. See the BirdWatch Ireland shop here for some nextbox cameras.

Should I move my nestbox if its not being used?

It often takes a year or two before a nestbox is used, so don’t panic if there aren’t birds nesting in it straight away. If you’ve picked a good location for it then you’re better off leaving it where it is rather than moving it around from year to year. The longer it is in one place, the more the birds get used to it and are more likely to use it down the line. If it hasn’t been used after two years, then it might be worth changing location. Never move a nestbox during the breeding season (start of March to end of September) as there might be birds using it without you realising it!

During the cold winter months, many garden bird species will use nestboxes as somewhere to roost and shelter for the night, so it’s worth leaving your box out all year round.

What other species use nestboxes, apart from the usual garden birds?

There’s a variety of more specialist nestboxes available for species of farmland and river habitats, many of which are available here on the BirdWatch Ireland shop.

Treecreepers will use a special sloped nestbox design that mimics a crevice along the trunk of a tree where they would naturally nest. Swallows will use artificial nest cups when placed under the eaves of a house or inside a shed or porch, and there’s a slightly different design for House Martins for the outside of buildings too. If you have a river with Dippers or Grey Wagtails, there’s a custom nestbox that can be attached to bridges to give them somewhere to nest.

Swifts are a species declining in large part due to loss of nest sites in buildings, but by installing and incorporating nestboxes into buildings in towns and cities we can halt their decline. We’ve produced a comprehensive guide to saving swifts which can be downloaded here.

If you have Barn Owls or Kestrels in your area, there are specially designed nestboxes you can provide for these species, further information for which is freely available online.

When is the best time to put up a nestbox?

There’s an old proverb that says something along the lines of “The best time to plant a tree was 20 years ago, the second best time is now!” and the same can be said for nestboxes. If you can get them up in March there’s still a good chance they’ll be used that year, but the further in advance of spring the better.

If you put it up in the middle of the nesting season (summer months) it’s unlikely to be used until the following year as birds will have already established territories and found nesting sites. By putting it up well in advance of the following breeding season you’re giving your local birds a chance to find it, get used to it and check it out ahead of the following year. Also, small birds such as Wrens will often roost (i.e. sleep) in nestboxes during cold winter nights, as somewhere warm and sheltered – so it’s not all about nesting when it comes to nestboxes!

Make your own nestbox

There are few things more rewarding than seeing wild birds raise their young in a nestbox you made yourself, and it’s a great activity to get the whole family involved in! Most of the common nestbox designs are fundamentally quite simple and straightforward to make yourself. All you’ll need are a few basic handtools and a plank of wood. You might even have some bits of wood lying around that you can recycle into a nestbox.

Click here for Design Plans to build your own Nestboxes

Different nestboxes to use in your garden

The differences in shape and entrance hole size of a nestbox will dictate what species can use it. See below for a variety of readily-available types of nestbox that would be suitable for your garden:

This type of nestbox with a 28mm entrance hole is ideal for Blue Tits and Coal Tits (which will also a 25mm hole), as well as Great Tits and Tree Sparrows. We have nextboxes like this in a variety of different designs in our shop – see **here** ,  and **here** for examples, as well as **this nestbox** with a changeable entrance hole. 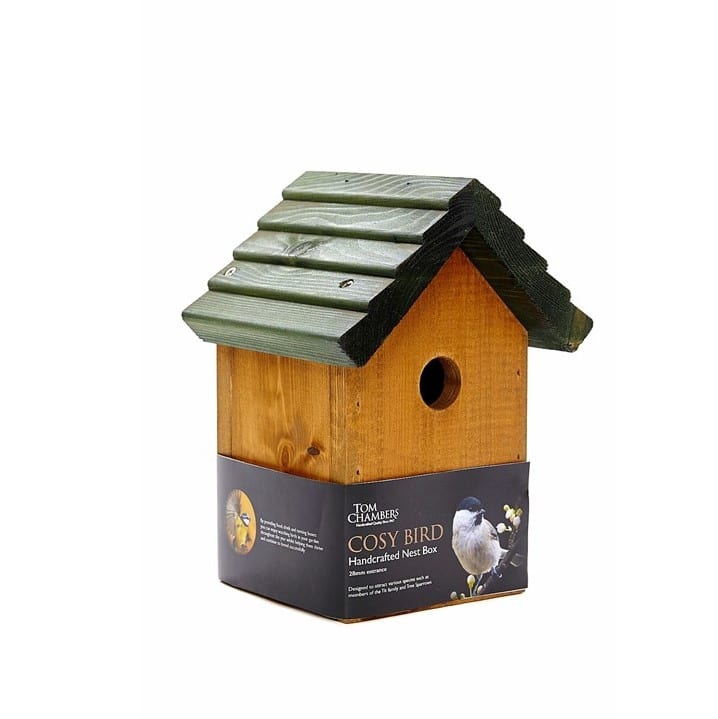 This type of nestbox with a 32mm entrance hole is ideal for House Sparrows and will also be used by species like Great Tits, Tree Sparrows, and possibly Blue Tits or Coal Tits. We have nextboxes like this in a variety of different designs in our shop – see **here** ,  **here**, **here** and **here** for some examples of different designs to suit your garden, as well as **this nestbox** with a changeable entrance hole and **this ‘build-your-own’ nestbox here**.

This is essentially three 32mm nestboxes joined together, that will be used only be House Sparrows. While most birds are territorial, House Sparrows like to nest in loose colonies so providing extra nesting opportunities might actually help attract them to your garden. This is a species on the decline in urban areas, despite having lived alongside humans for centuries. Imagine the different it would make if you and your neighbours or local group put up a number of these terraced nestboxes on houses, sheds and walls in your area? See **here** for a good example.

Open-fronted nestbox for Wren and Robin

These species like an open-fronted nestbox, placed a bit lower down (<2m) than the nestboxes above, and ideally amongst dense vegetation (though there should be a clear flightline into the nest). See different designs of this sort of nestbox **here**, **here** and **here**, and there’s a nestbox with a changeable front available **here** too.

This is very similar to the nestboxes above for Robins and Wrens, but the opening on the front is even larger. You may get Robins or Wrens utilising your Blackbird box instead. Again, this box shouldn’t be placed any higher than 2m and should be placed amongst ivy, brambles or some sort of other vegetation that will help hide it from predators, but while maintaining a clear flight path for the Blackbirds to access it. See a version of this sort of nestbox **here**.

This is a nestbox design unique for Treecreepers, built to mimic the narrow gaps and clefts behind loose bark on mature trees, where they would naturally nest. Treecreepers are very common around Ireland, though not often seen. We only have one design of this sort of nestbox for sale in our shop – **available here**.