Summary
BirdWatch Ireland are participating in an international campaign coordinated by the eNGO OurFish, calling on Irish and EU decision makers to prioritise ending overfishing as a key action to address the global climate and biodiversity crises. In response to the overwhelming scientific evidence supporting the benefits of ending overfishing, scientists from across Europe and Ireland have responded to our call to action by signing a statement of support.

Overfishing
Of all the threats facing the oceans today, overfishing remains the greatest pressure on sea life. Globally industrial fishing’s footprint in four times that of agriculture, covering 55 percent of the ocean. In the NE Atlantic despite some progress having been made since the reform of EU fisheries policy in 2013, 32 percent of fully assessed stocks within the NE Atlantic ecoregions remain outside of safe biological limits, while 38 percent are overfished.

The industrialisation of European fisheries drove overfishing as technological advancements left no fish too big, no sea to broad or deep. Overfishing has directly damaged marine habitats with knock on impacts on the species that depend on them. Overfishing has depleted or decimated populations of fish and in doing so fundamentally altered the balance within marine ecosystems. Fisheries began by overfishing large fish species before moving onto smaller ones, depleting, and hollowing out marine ecosystems. Likewise, fisheries depleted coastal shallow waters before extending their reach to the high seas and the depths beyond the continental shelves. The impacts of overfishing fish stocks have reverberated through marine habitats impacting on other marine species like whales, dolphins and of course seabirds that eat fish. 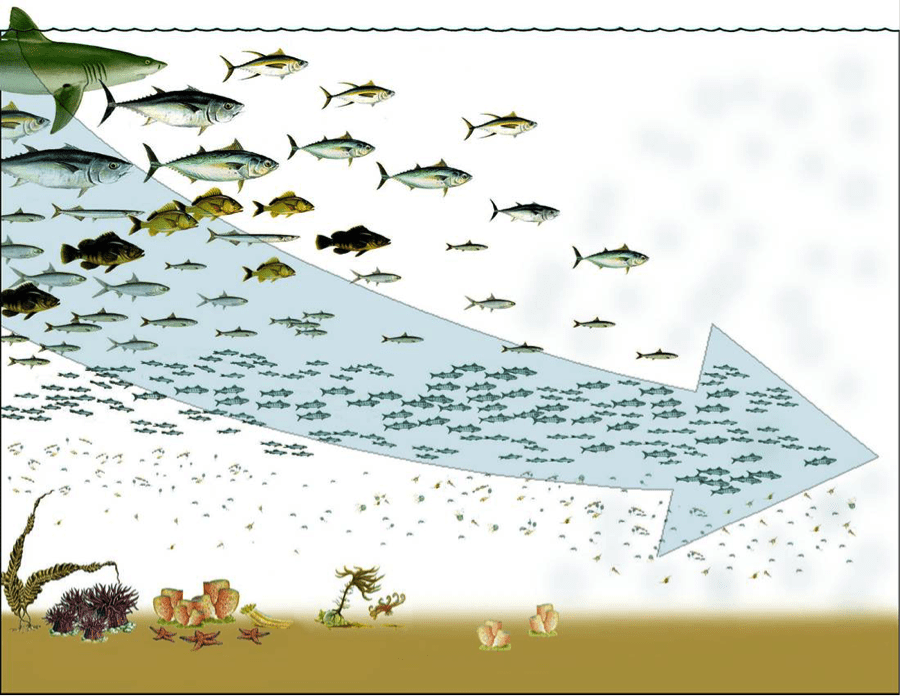 Figure 1: Fishing down the food web is described as the process whereby fisheries in a given ecosystem, having depleted the large predatory fish on top of the food web, turn to increasingly smaller species, finally ending up with previously spurned small fish and invertebrates.

All of these negative impacts of overfishing make it a leading driver of biodiversity loss. In Irish waters six species of sharks and rays are critically endangered and a further five species are endangered. There are eight commercial fish stocks in Irish waters which have totally collapsed and even the much-maligned Herring Gull is on the Red List of Irish Birds of Conservation Concern.

Ocean and Climate
The ocean provides essential services to life on Earth. It is a key driver of global weather patterns and contributes almost half of the annual primary production on Earth. Something for us to be grateful for every time we take a breath. The ocean also provides essential planetary function through the cycling of carbon (i.e. biological carbon pump) and carbon sequestration (i.e. carbon sink).

Complex processes transfer CO2 from the atmosphere to the deep ocean where it can be stored, or sequestered, for millennia. The deep ocean zones are the largest reservoir of stored carbon on Earth, storing more than 50 times the amount of carbon in the atmosphere. The ocean plays an essential role in mitigating climate change through its ability to capture and store carbon; this buffer us from increasing levels of atmospheric CO2 and therefore slows changes in global temperature. It is estimated that about one-quarter of all the CO2 emitted by humans over the past 20 years has been taken up by the global oceans.

Marine organisms also play a critical role in cycling and sequestering of ‘blue carbon’. Atmospheric carbon enters the marine food webs through photosynthesis and passes through marine food webs. A small proportion of this carbon makes its way to the deep ocean where it can be stored for long periods of time. Additionally, calcium carbonate forming plankton also transport carbon to sediments when they die contributing to the long-term carbon sink.

Wildlife are themselves moving carbon and they play complex roles in the cycling and sequestration of carbon in the marine environment. Marine animals from krill to whales also play an important role in transporting carbon and nutrients between surface water and the deep ocean through their daily movements. Marine vertebrates also enhance the uptake of carbon by phytoplankton through the process of ‘biomixing’, which is the physical mixing water of nutrients through the movement of within the water column. Just as on land marine habitats such as seagrass, saltmarsh and mangroves store carbon. The complex interactions of species within marine food webs mean that species living within these ecosystems play an essential role in maintaining the health of the habitats allowing them to continue to deliver ecosystem services. 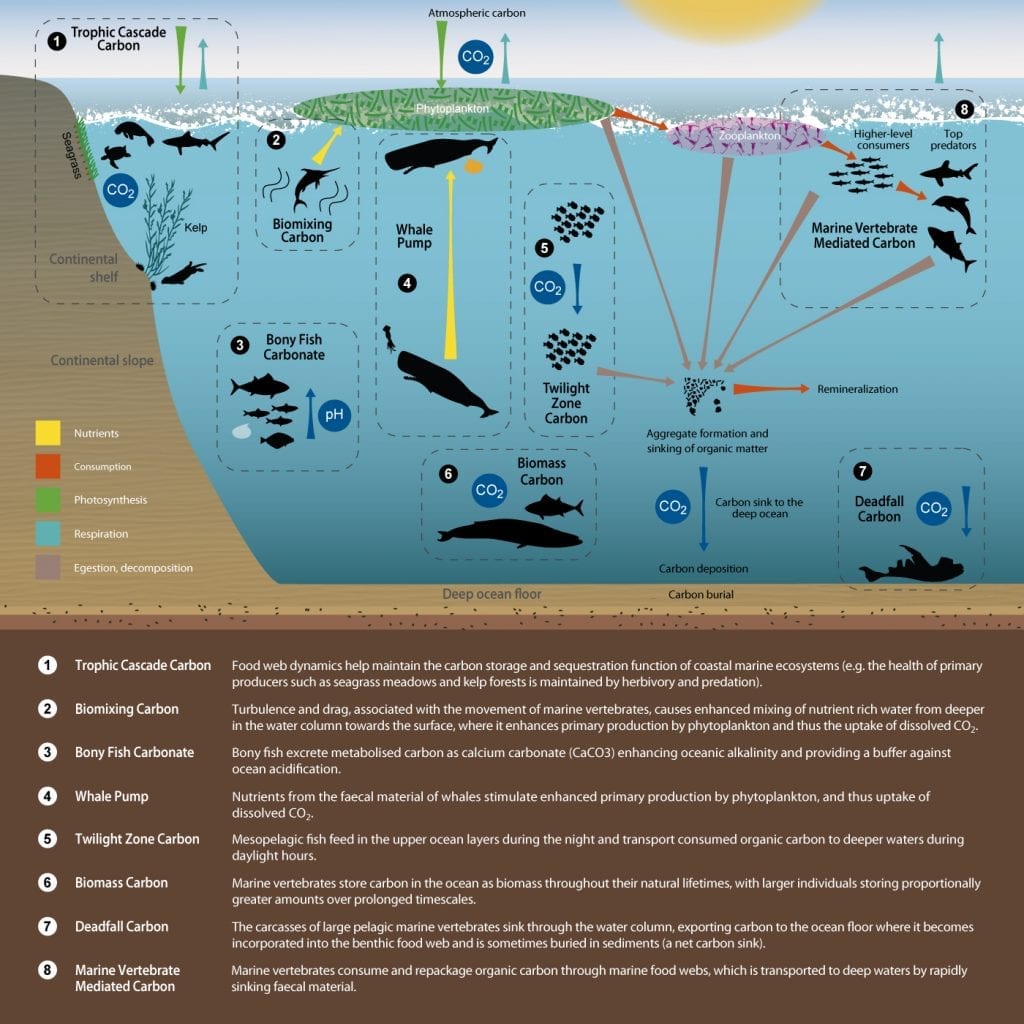 Figure 2: Marine life plays an important role in the sequestration of carbon in the ocean through their role in marine carbon and nutrient cycles.

While more research is needed to understand and quantify the complex ways in which ocean ecosystems interact and influence climate change it is clear that the ocean plays an essential role in the cycling and storage of carbon, a role that to date has been poorly reflected in either climate, biodiversity or fisheries policy.

Climate change impact on Ocean
Interaction between the ocean and the climate are of course not one sided. Globally climate-related impacts on marine environments are being observed at a species, population, and ecosystem level.  Climate change is driving both physical changes such as increasing water temperature but also chemical changes through the ongoing acidification of the ocean as it absorbs a proportion of the atmospheric CO2. These changes are exerting pressure on species shifting or squeezing their distributions, effecting growth, reproduction, and survival. Among the most well-established impacts has been the shift in species’ distributions to deeper and higher latitudinal waters in recent decades. These species level shifts are also having impacts on population dynamics, driving changes in ecosystem structure and functioning. The onset of these rapid climate-related changes in ecosystems is increasing pressure on fish stocks, with the potential of extinction for some fish species. All these impacts will have serious implications for the long-term sustainability of marine ecosystems and the fisheries that depend on them.

Impacts will act synergistically
The ocean is being degraded by an unprecedented array of anthropogenic pressures. Pressures such as overfishing, climate change and pollution are not happening in isolation of each other. These stressors may have synergetic effects on marine ecosystems and their ability to deliver ecosystem services. There is a serious risk that these stressors will result in tipping points resulting in cascading impacts that could accelerate biodiversity loss and critically impair the functioning of ecosystems.

Ending overfishing as climate action and climate mitigation
As a stressor, overfishing is impacting on marine biodiversity, food security, and the socio-economic wellbeing of communities that depend on fisheries. By reducing fishing pressure to levels that allow fish populations to stabilise and rebuild ending overfishing can restore the health of our oceans delivering larger healthier fish stocks, more diverse fish populations, healthier and diverse marine habitats; which are part of more complete and resilient marine ecosystems.

Scientists have proposed that ending overfishing would increase the oceans resilience to climate by (a) leaving more fish in the ocean; (b) maintaining the structure of marine food webs; and (c) ensuring rich and diverse marine habitats and ecosystems.

Ending overfishing would also directly contribute to climate action by reducing the amount of CO2 in the atmosphere by:
(i) Emission of less CO2 by the fishing sector itself – as fish stocks rebuild less fishing effort is required to find and catch fishing quotas. Therefore, the efficiency of the fishing sector would increase reducing the sectors emissions.
(ii) Sequestration of higher levels of CO2 that more fish in the ocean that ending overfishing entails – larger fish stocks and healthier marine ecosystem have a greater capacity to fulfil the oceans functions as a biological carbon pump and as a carbon sink.

Conclusions
Climate change and overfishing are acting in combination, degrading ocean health, putting marine ecosystems and vital services they provide the planet at risk. Ending overfishing would reduce the cumulative pressures on the ocean and increase its resilience, partly mitigating the effects of climate change.

The crises of climate change and biodiversity loss require bold and ambitious action. This may sound daunting, but we have exciting opportunities. Ending overfishing is a decisive and clear action which would have a significant and far reaching positive impact on the ocean, the climate, fisheries dependent communities, and in fact on all of us. To realise these benefits, EU Institutions and member states like Ireland just need to ensure: