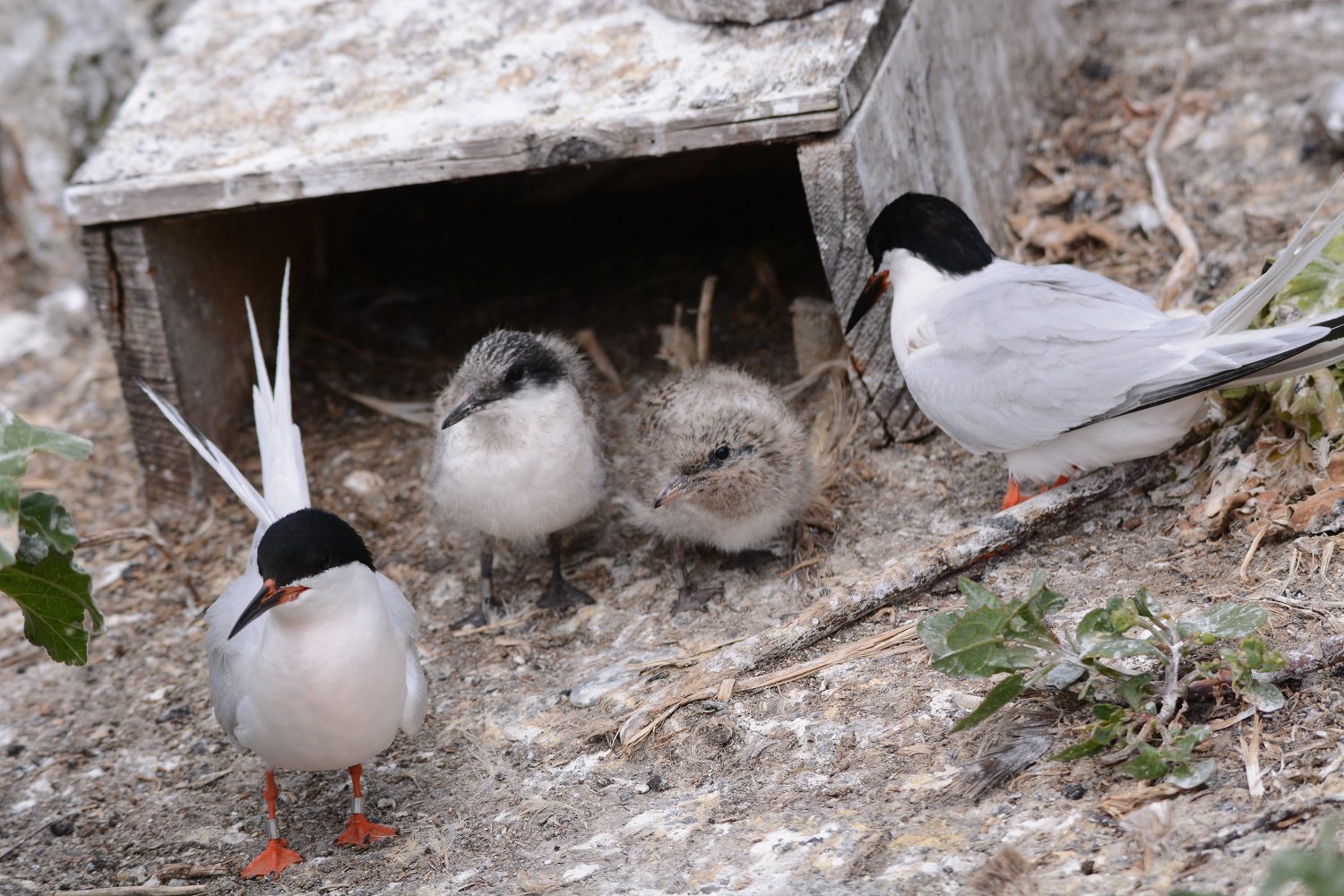 Ireland is home to the majority of Europe’s Roseate Terns with Rockabill incredibly hosting 85% of the European population on this tiny island, which is the size of a football pitch. The number of breeding pairs is now ten times what it was when the project started in 1989, and chicks that hatched and fledged on Rockabill have gone on to boost other important colonies in Wexford and England.

And every year for the past 33 years, BirdWatch Ireland conservation wardens have been placing hundreds of wooden nest boxes out on Rockabill Island, in effect providing the terns with secure little houses to nest in. 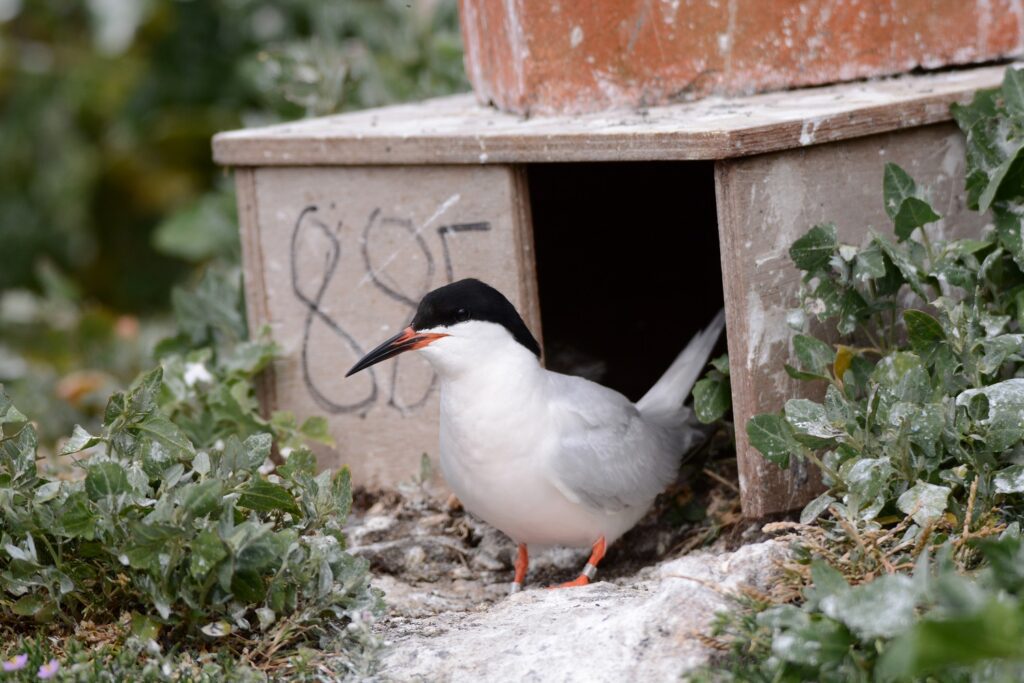 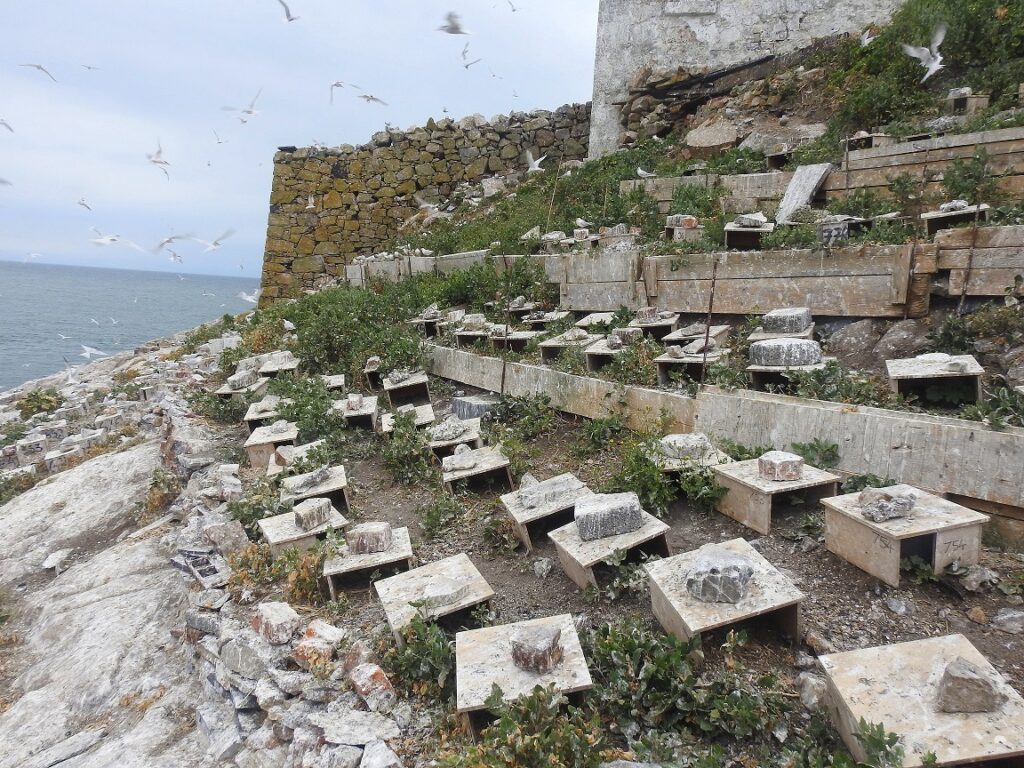 Like most seabirds, Roseate Terns nest on the ground, but whereas most Tern species prefer open areas to lay their eggs, Roseate Terns nest in sheltered spots – usually under vegetation or beside rocky overhangs or in crevices. They like their nests to be hidden from above and from a distance to protect them from predators and poor weather.

The scientists hoped the nestboxes would provide additional shelter, but by analysing 15 years of data comparing the impact of traditional open nests with nests in the nestboxes, they found their strategy was having an even bigger positive effect.

Their analyses show that the nestboxes helped the Roseate Terns have much more success in raising their young: more eggs hatched and more chicks survived to fledge into juveniles when they were born in the nestboxes.

This suggests the nestboxes help protect the terns from bad weather, predators and even from squabbles with their neighbours, while also making the best use of limited space on this tiny island by allowing for a much higher density of nests. 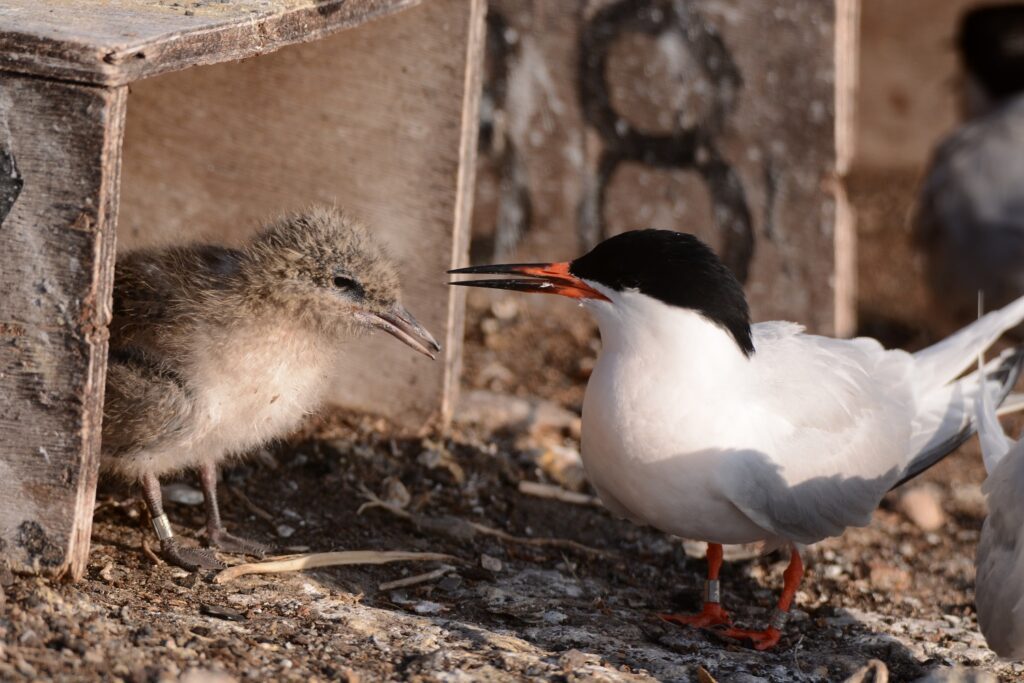 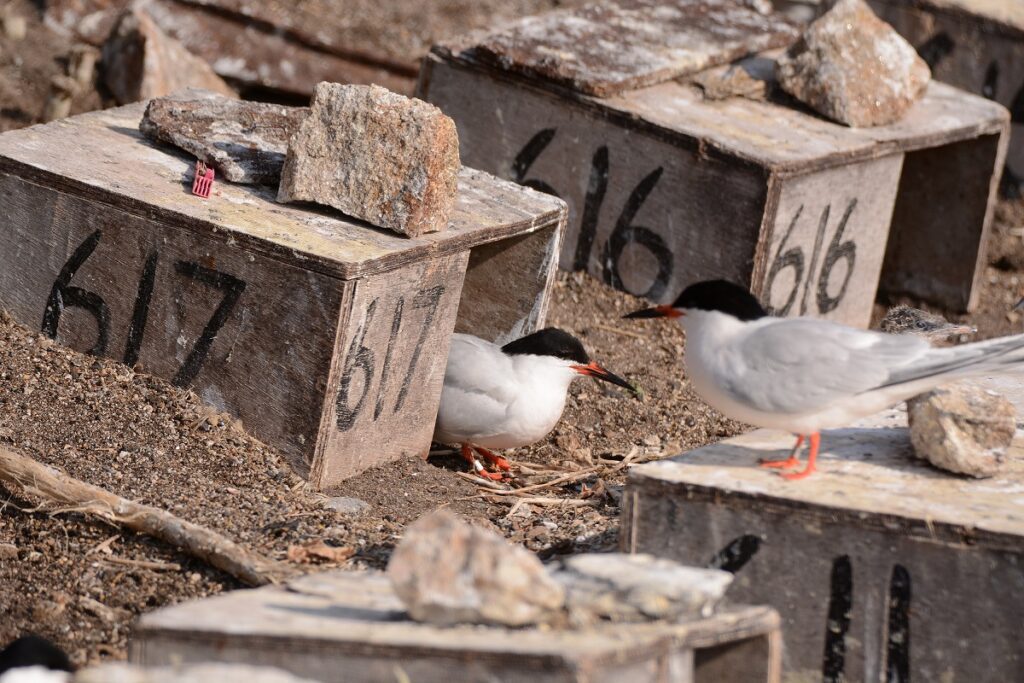 Dr Darren O’Connell is a co-author of the research article, published this week in the journal Ecological Solutions and Evidence. Dr O’Connell, who conducted the data analyses during his PhD in Trinity’s School of Natural Sciences, is now a Research Fellow at University College Dublin. He said:

“These sorts of follow-up analyses are really important as they look into how successful any conservation actions have been and let scientists know whether they are putting effort into the right areas.

“It is fantastic to have found that over three decades of a hard manual slog by BirdWatch Ireland wardens – during which time they put out hundreds of nestboxes on the island each year – was more than worth it. What seems like a simple conservation strategy is proving to be very effective by having a really positive impact on Roseate Tern breeding.”

Brian Burke, Scientific Officer with BirdWatch Ireland and another co-author of the journal article, was a Rockabill warden for three years. He added:

“Rockabill is an amazing place and we’re extremely lucky to have such an internationally important seabird colony on the doorstep of our capital city. The tern warden job is a tough but rewarding one as nothing beats the sight of the fledgling Terns all across the island in late summer. When you see them thriving you know all that hard work has been worthwhile.

“It’s great to now have the science to back up what we’ve been doing, and hopefully other conservation projects can learn from this.”

The nestboxes deployed by the wardens are cheap and easy to make, and on another positive note, many have been made and colourfully decorated by students in the local Balbriggan Community College, helping to open young eyes to the importance of conserving our precious biodiversity. 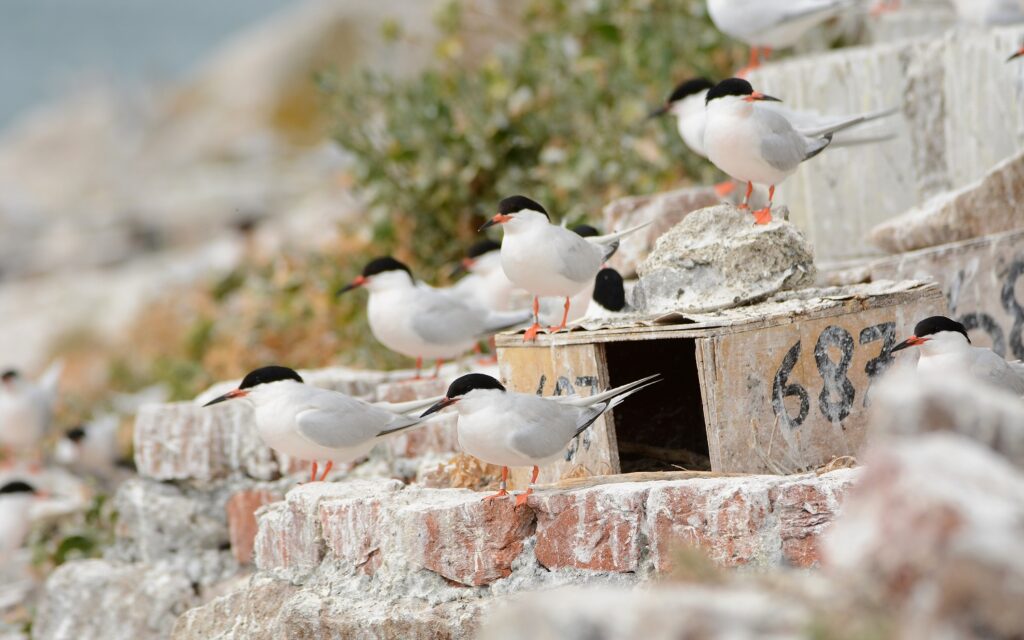 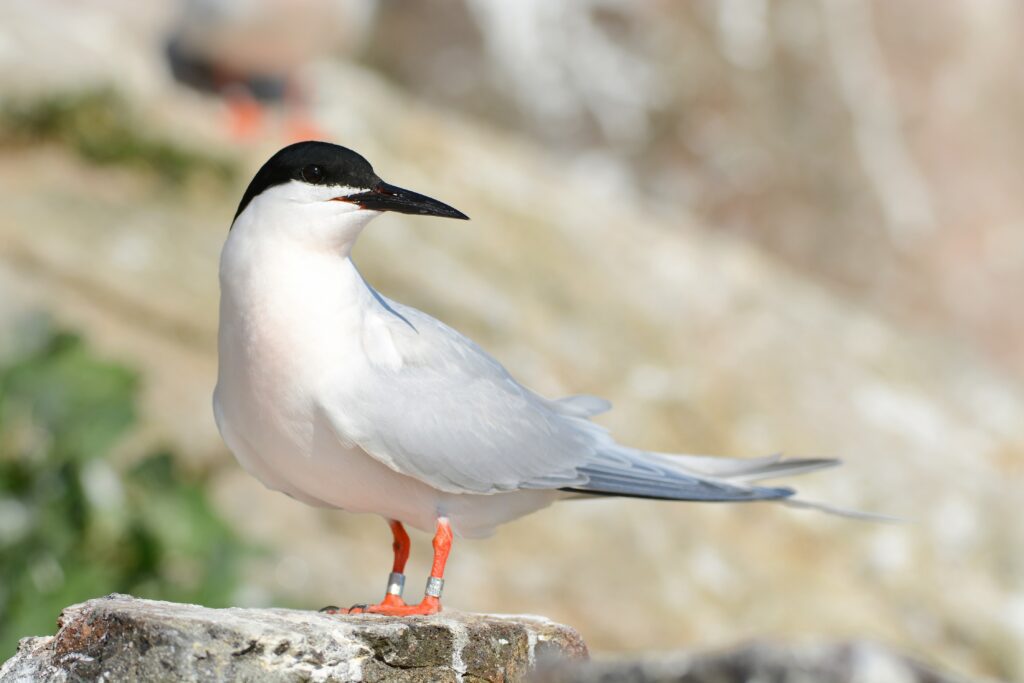 The full scientific paper  in the journal ‘Ecological Solutions and Evidence’ can be downloaded here.

The conservation of Roseate Terns on Rockabill is funded by the National Parks and Wildlife Service of the Department of Housing, Local Government and Heritage, and delivered by BirdWatch Ireland, with the cooperation of the Commissioners of Irish Lights.