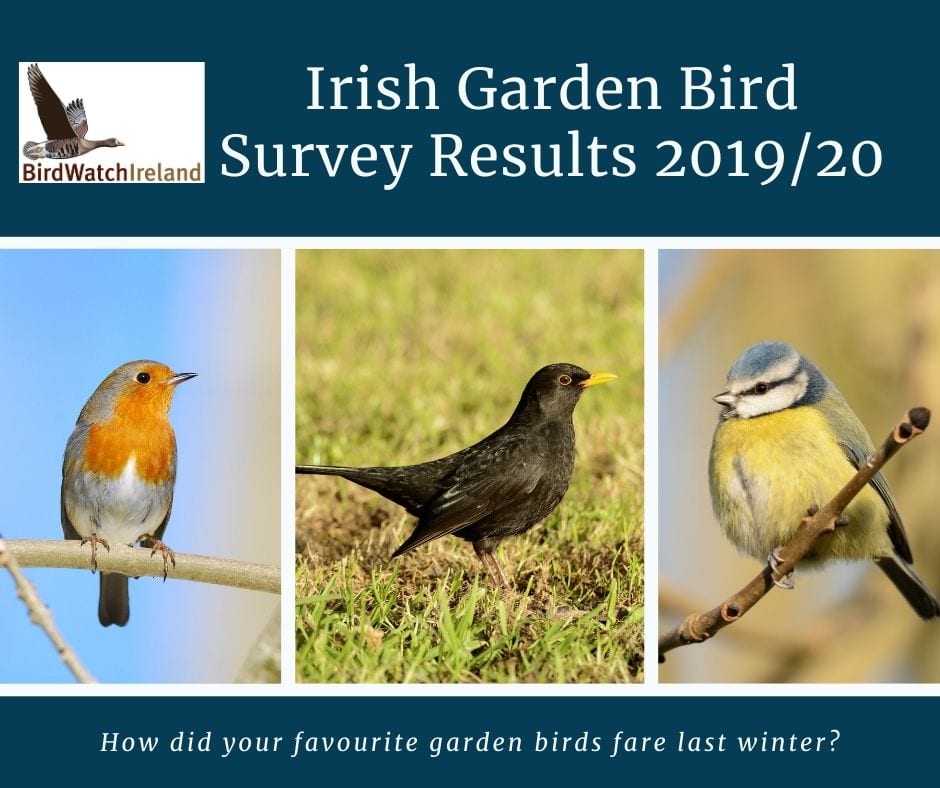 The Irish Garden Bird Survey is the biggest and longest-running survey of it’s kind in Ireland. We need as many people as possible all over the country to take part this winter. Taking part couldn’t be easier – See here for details on how to participate this winter – and see below for what last year brought for Ireland’s favourite garden birds.

The Irish Garden Bird Survey has been running since 1989/90. Every winter, individuals, families and housemates all across Ireland send us counts of their garden birds during the coldest winter months, which in turn has provided us with a huge wealth of data about these birds. Some species have increased a lot over that time, while others continue to decrease. Some show huge declines after even a few days of snow and frost, whereas others are evidently much better able to cope. And within the same winter, we see important differences in the birds that use urban gardens versus those in rural ones, or differences at a county level. Long-term surveys are crucial to the monitoring and conservation of our favourite birds in Ireland, and the more years you take part in the Irish Garden Bird Survey then the more valuable your data becomes! See below for an overview of the results from the survey last winter (2019/20). 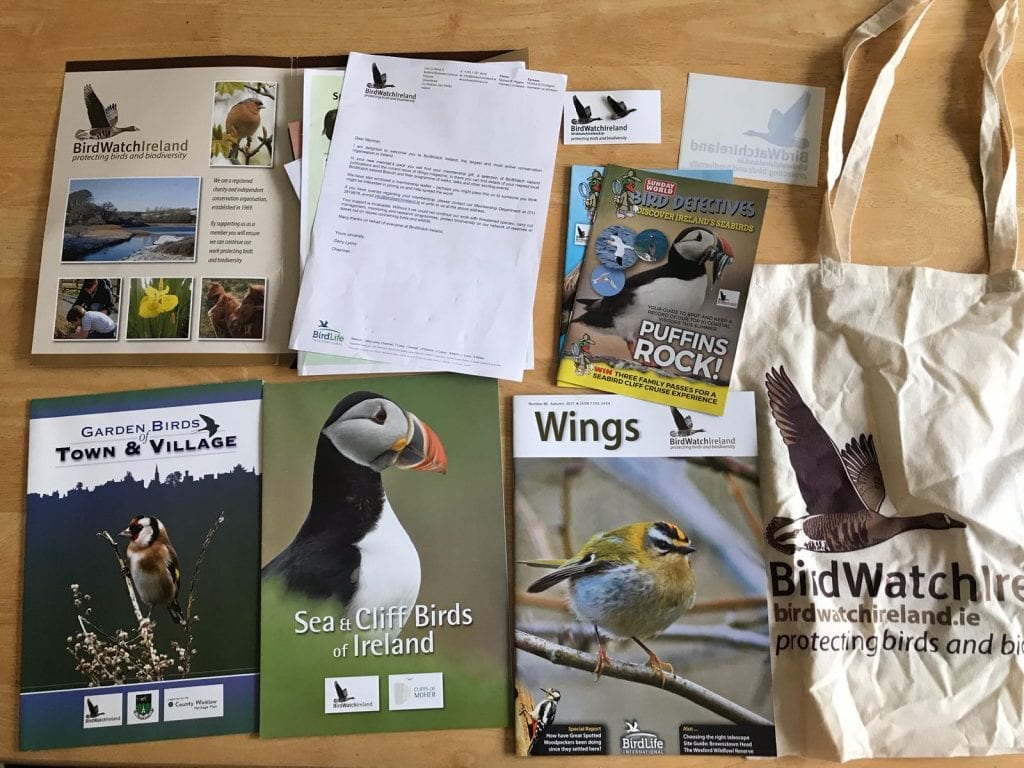 An example of the type of things you receive in your welcome pack when you first join as a BirdWatch Ireland member.

If you’re a BirdWatch Ireland member, you’ll have already received these results in the winter edition of Wings magazine that would have arrived in the post at the start of November. If you’re not a BirdWatch Ireland member you can still take part in the survey (and we urge you to!), but if you go the extra step and become a member you won’t regret it! You’ll receive a welcome pack full of information about Ireland’s birds, including a garden birds poster with loads of advice on how to look after birds in your garden. You’ll also get our Wings magazine four times per year – the gift that keeps on giving! And if you opt for a family membership, there’s our kids magazine ‘Bird Detectives’ twice a year too. Membership makes a fantastic gift for family or friends, and you’ll be supporting Ireland’s largest wildlife conservation charity in the process! (click here to see the different membership options available) 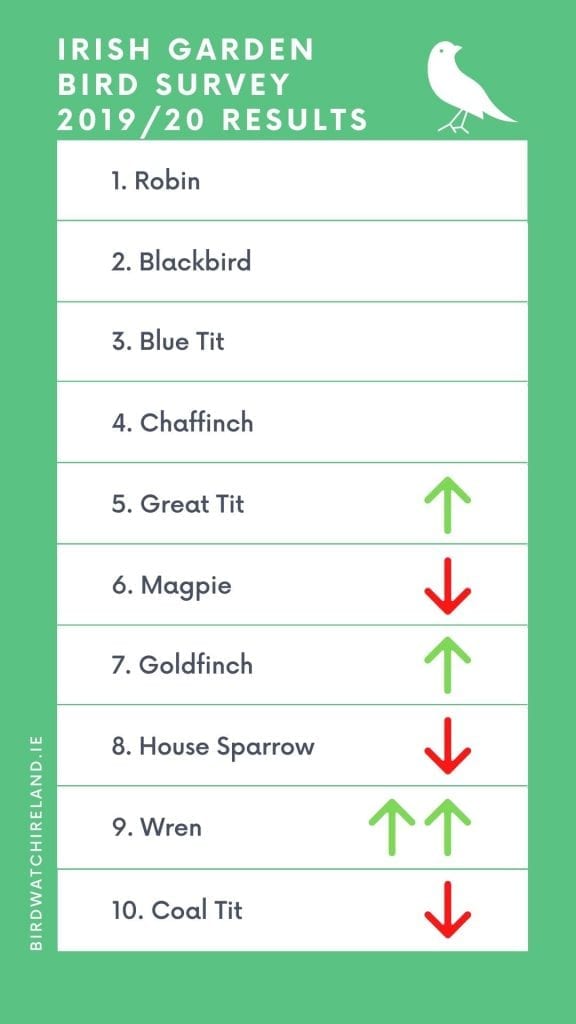 One of the most important things about last winter, from a birds point of view, is that it was pretty mild throughout. On top of that, the winter before was much the same. As a result, no birds were particularly hard-hit by frost or snow, and many birds continued their recovery from the ‘Beast from the East’ a couple of winters previous.

For the tenth year in a row, the Robin was the most common bird in Irish Gardens last winter – seen in 99.8% of gardens! Blackbird and Blue Tit were close behind, and the sheer abundance of these birds in the Irish countryside means they’re more often than not the top 3 birds recorded each year. Outside the top 3, Chaffinch held on to 4th place, and Great Tit moved up one to get into the top 5. That meant Magpie lost out and was relegated to 6th, though were still seen in 90% of gardens. After that we have the ever-popular Goldfinch which moved up to 7th, their highest ever position in the rankings table. It wasn’t until winter 2000/01 that Goldfinch managed to break into the top 20, but it has spent 9 of the last 10 winters in the top 10 and is going from strength to strength. House Sparrow are a pretty robust and tough bird, so they always tend to do well, though are absent from areas where there’s no suitable nest site in the summer, as they don’t tend to move far even in the winter. Wren, as our second-smallest bird, are still recovering from the Beast from the East a few winters back but jumped up two places to 9th last winter. And finally, the always-active Coal Tit dropped one position but still stayed in the top 10. In Ireland we have our own subspecies of Coal Tit, and reports from around the country this autumn suggest that they’ve had a very good year – so I’m predicting they might climb up a few places in the table this winter! 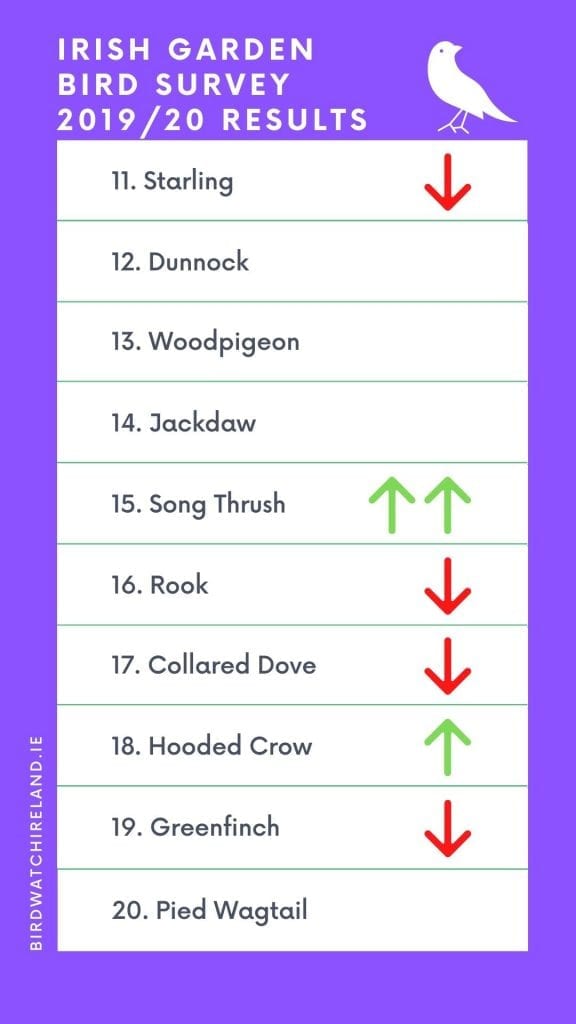 As we move down the table, there’s always a bit more movement from year to year.  Starling had previously been in the top 10 but dropped out last year. Dunnock and Woodpigeon kept the same positions as the previous year, and occurred in over 70% of Irish gardens. Song Thrush, another species that tends to get hit quite badly by snowy winters, moved up two places to 15th. It’s a good indication that a bad winter every now and again is ok – our birds have evolved to cope with that. The more bad years we have in a row though, means they don’t have a chance to recover before getting hit hard again. The two consecutive cold winters around 2010 and 2011 really hit some of our birds quite badly, including Song Thrush. Further down the table, Hooded Crow have gradually moved up the table over the lifetime of the Irish Garden Bird Survey, and last year was their best year yet – reaching 18th in the rankings table and occurring in 60% of Irish gardens. This is probably down to a genuine increase in their numbers nationally in recent years, as well as increased use of gardens. Pied Wagtail retained their spot in the top 20, occurring in 54% of Irish Gardens. Interestingly, if we delve a bit deeper, we see that they occurred in over 70% of rural gardens last year, but only 30-35% of urban and suburban gardens. That’s why we ask whether your garden is in an urban/suburban/rural garden as part of the survey – different species show different patterns of distribution and behaviour and it’s important we capture that!

Other interesting results from last winter include the small species like Long-tailed Tit (23rd place) and Goldcrest (24th) jumping several places up the rankings table, seemingly a continued recovery after their numbers were hit by the snow during the ‘Beast from the East’ a few years ago. Another highlight was the first recording of Ring-necked Parakeets in Irish gardens, the continued increase in the number of gardens and counties that have had visits from Great-spotted Woodpeckers. What will this winter bring? A Waxwing winter? A bounty of Bramblings? The more people taking part in the survey, the more we’ll find out! 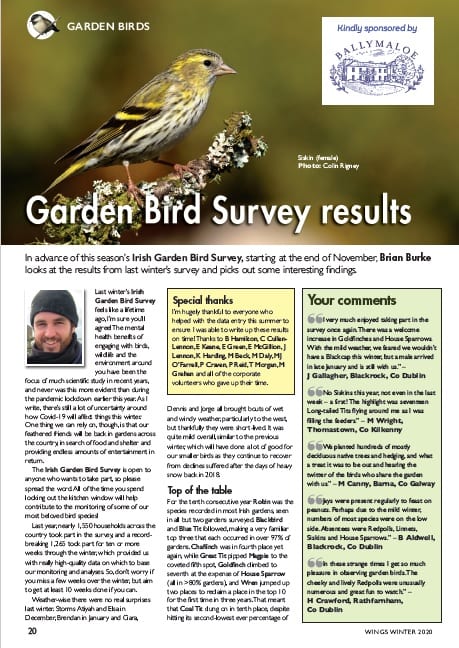 A full and detailed account of last year’s Irish Garden Bird Survey results is featured in a three page article in our Wings magazine, sent out to members this winter.

So that’s just a flavour of what the Irish Garden Bird Survey tells us each year. If you’re a member, your Wings magazine will give you the top 30 list as well as additional details on many of the species and trends we’ve seen. If you’re not a member, then take a look at the different membership options, and remember – it makes for a much better Christmas gift than socks or scarves!! 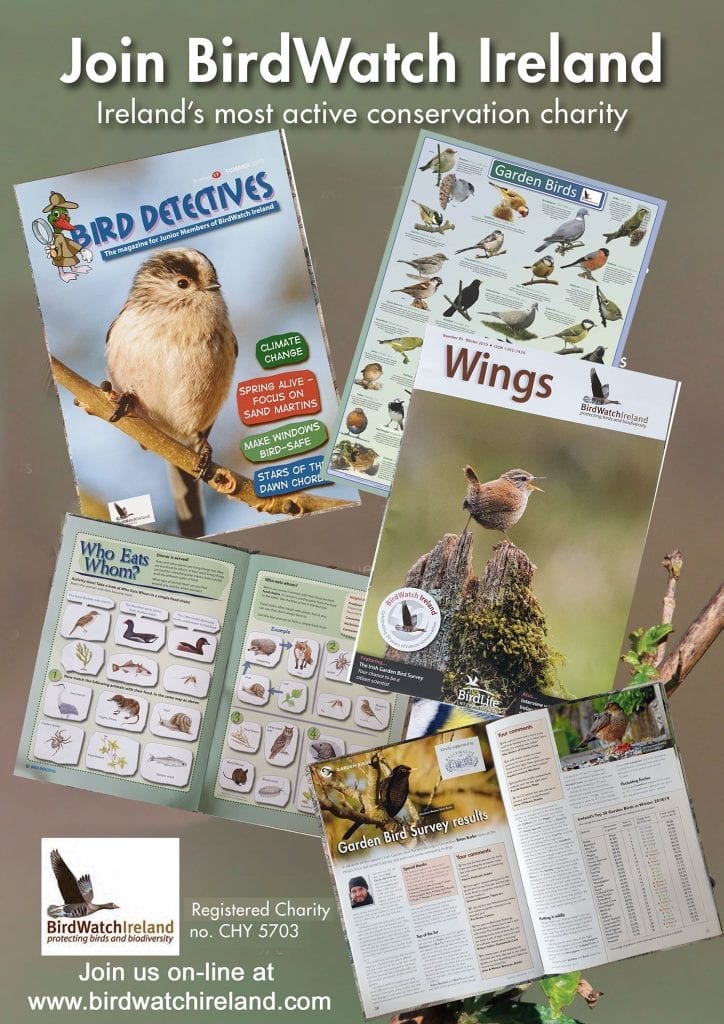 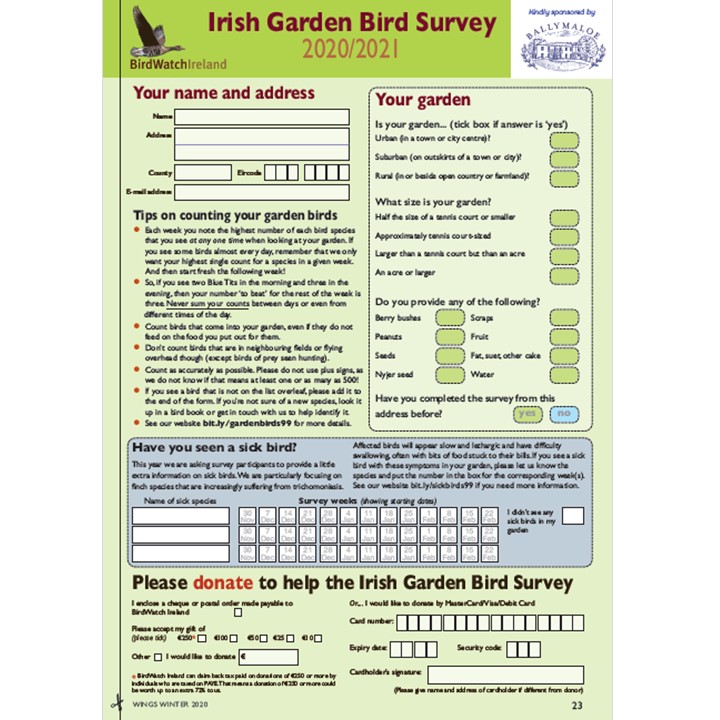