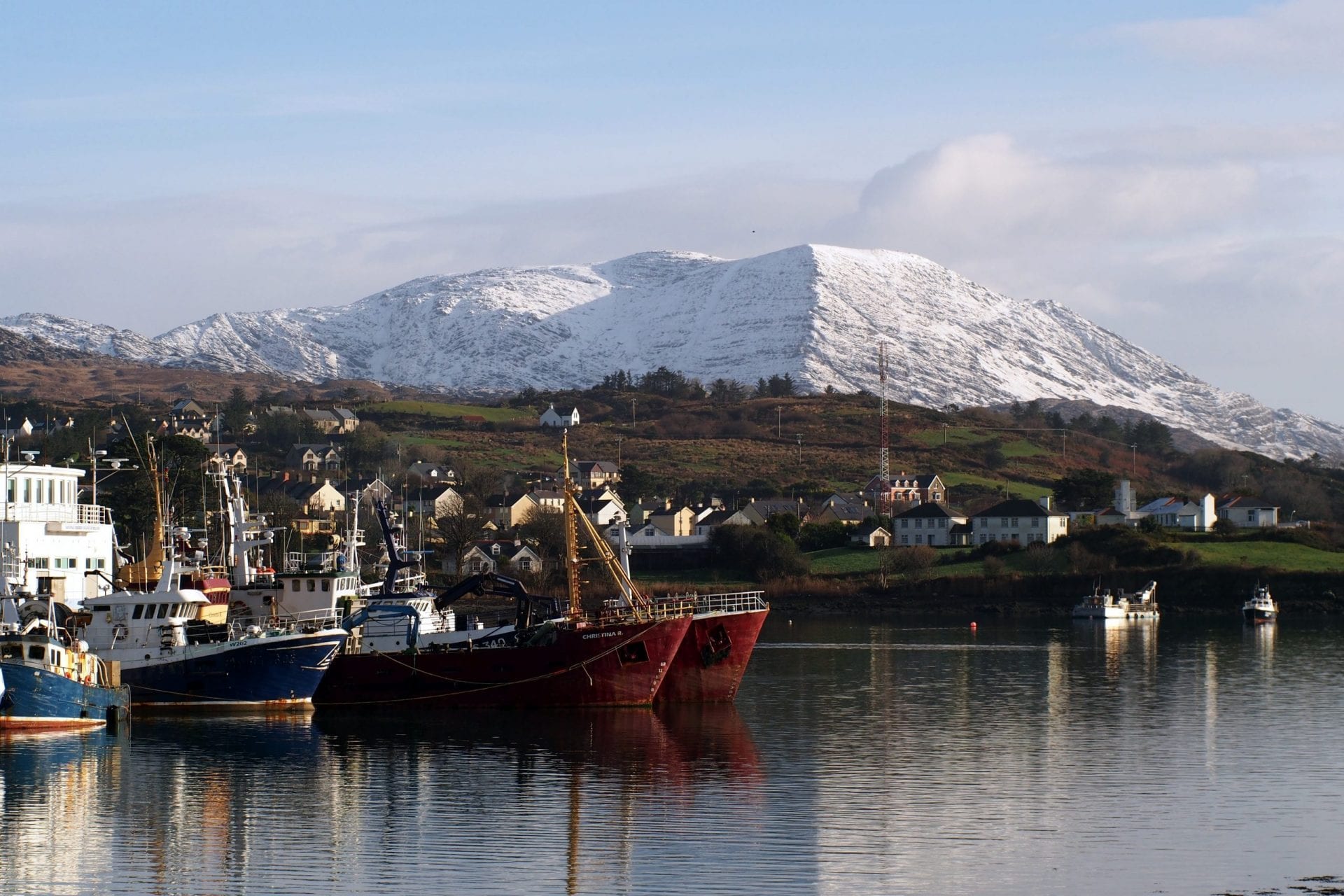 This afternoon the Department of Agriculture, Food and the Marine notified stakeholders that the Court of Appeal has decided to refuse Minister McConalogue’s application to continue a stay on the Governments ban on large trawlers (>18m) inside Ireland’s inshore waters, also known at the 6 nautical mile zone. In effect large trawlers can resume trawling with immediate effect and no longer require an authorisation to fish for sprat inside 6nm.

This stay was an interim measure which was to be in place while the Minister awaited the ruling of the Court of Appeal on a permanent ban. A full hearing of the Court of Appeal took place on 22nd June last and judgment on the case is reserved and is not impacted by today’s announcement. BirdWatch Ireland is deeply concerned by the immediate negative impacts that will result from the lifting of the ban but also by what this ruling may mean for the court’s overall position in advance of its final ruling.

In December 2018, then Minister Michael Creed announced that vessels over 18m will be excluded from trawling in inshore waters inside the six nautical mile zone and the baselines from 1st January 2020.  A transition period of three years for vessels over 18m targeting sprat was allowed to enable adjustment for these vessels, as the sprat fishery is concentrated inside the six nautical mile zone.

The policy directive introducing this ban was one of the most important fisheries policy shifts in the history of the state and was broadly welcomed as being the right decision from a social, economic, environmental and social justice perspective. The majority of the over 900 stakeholders who made submissions in response to the Minister’s review of fishing access inside the 6 nautical mile zone (6nm zone) supported restrictions on large trawlers based on environmental, economic and gear conflict issues.

The rationale behind the ban was supported by expert analysis by the Marine Institute and the Bord Iascaigh Mhara. These reports highlighted that restricting the access of larger vessels inside the 6nm zone would lead to improved protection of coastal environments and essential fish habitat, benefitting marine biodiversity and commercially exploited fish stocks. They highlighted the socio-economic benefits for the smaller inshore vessels, that constitute the vast majority of Ireland’s registered fishing vessels. The potential benefits included diversification opportunities, more jobs, and added value of landings. Improved management of inshore waters could be achieved by aligning fishing more closely with local ecological and environmental objectives and by reducing conflict between mobile and static gears. For coastal communities and consumers benefits could include a strengthening of the link between local fish resources and local economies with spin-off benefits for the sustainability of supply chains and local businesses.

A Judicial Review was taken by two applicant fishers challenging the validity of the policy. On 6th October 2020, the High Court judgment held, in summary, that the policy was made in breach of fair procedures and is void and/or of no legal effect. In an unprecedented move a strong coalition of environmental NGOs and inshore fishers formed an alliance, calling on Minister McConalogue to appeal the High Courts ruling. A letter, sent to the Minister, jointly signed by Birdwatch Ireland, the National Inshore Fisherman’s Association (NIFA) and National Inshore Fishermen’s Organisation (NIFO), An Taisce, Cork Environmental Forum, Cork Nature Network, Coomhola Salmon Trust, Environmental Pillar, Friends of the Irish Environment, Irish Seal Sanctuary, Irish Whale and Dolphin Group, Irish Wildlife Trust, Oceana, Seas at Risk, Sustainable Water Network (SWAN) and Our Fish, received broad political and public support. The Minister subsequently appealed the decision of the High Court to the Court of Appeal and as we have said we still await the courts final ruling.

It is of serious concern to BirdWatch Ireland that sprat landings have persistently been too high driving overfishing. According to the scientific advice landings have exceeded the advised sustainable catch limits every year since 2013, when catch limits were first introduced. Landings have massively increased in recent years, going from 4696t in 2018 to 14353t in 2019 and 15172t in 2020, exceeding the catch levels deemed to be sustainbale by scientists by over 500% in both years, shattering all previous records.  Overfishing is occuring on a massive scale in this poorly managed and poorly regulated fishery. We now fear that overfishing of sprat will again occur this winter because of this ruling. 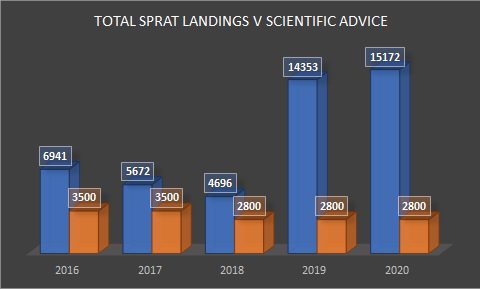 European sprat is critically important species, linking plankton and top predators including seabirds and marine mammals. Sprat are also an important forage fish species for commercial fish species like Herring . Overfishing sprat is therefore a significant risk to the health of commercial fish stocks which poses socio-economic implications for the fishing industry. This is especially relevant when considering that three out of the five herring stocks that Irish fisher’s exploit have collapsed and have zero catch advice for 2021. The overfishing of sprat a serious threat to the recovery of these and other commercial stocks.

The ongoing overfishing of sprat by large pelagic trawlers also poses a direct risk to the sustainability of commercial fish stocks through the capture of juvenile fish species like herring as bycatch in the sprat fishery. We do not believe that the current measures in place are sufficient to protect juvenile fish stocks and their nursery grounds from the indiscriminate activity of large pelagic trawlers.

Sprat is also an important prey item for other marine species such as seabirds and cetaceans. BirdWatch Ireland’s research shows that sprat is an important prey species for 12  out of the 23 regularly occurring breeding seabirds in Irish waters . Many of these species are Amber listed (medium) birds of conservation concern in Ireland. The Irish Common Gull population as an example has decreased by -25% over the long-term.

Overfishing sprat is also a threat to the Whale species that pass through Irish waters during the summer months. Research by the Irish Whale and Dolphin Group has shown that some Irish whales species rely heavily on sprat . The diet of Fin Whales in Irish waters is comprised of 50% young sprat and herring. Humpback whales are even more reliant on sprat and herring in Irish waters as these fish make up 70% of their diet.

The overfishing of sprat and the collapse of Irish Herring stock poses a significant risk to marine wildlife. This is particularly a concern in the South-West of Ireland as the region supports some of Irelands most important feeding grounds for Irish Whales and internationally important seabird colonies. The ongoing overfishing of sprat also poses a serious risk to the sustainability of commercial fish stocks directly through the bycatch of juvenile fish species like herring and indirectly through the important role of sprat as a prey species.

It is therefore critically important both from an environmental and a socio-economic perspective that Minister McConalogue takes urgent action to reinstate the ban on large trawlers in Ireland’s six nautical mile zone.  In this context we again call on the Minister to make good on the governments promise to ban large trawlers from Irelands inshore waters.