THE SAD STORY OF EUROPEAN COD 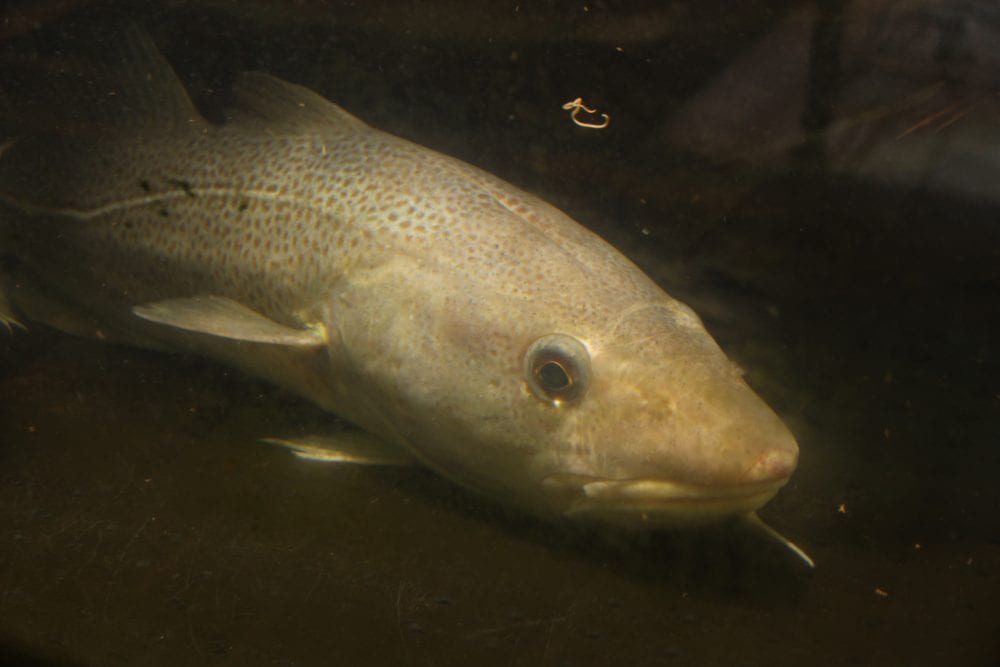 One of our most famous fish is in crisis. The scientific assessment of cod stocks across Europe shows that almost all of them are in a critical state, requiring a drastic cut in catches as soon as possible. This sorry state of affairs has been long in the making and was completely avoidable. It also comes at a crucial time for the planet when we need our seas in peak condition to tackle the threat posed by climate change.

Once upon a time Europe’s seas were filled with cod. These impressive predatory fish can grow up to two meters long and play an essential role in the ocean ecosystem. Cod has also been an important food source since the middle ages, where its drying and salting allowed its trade across the continent. Its popularity hasn’t waned, and now forms a staple in many homes with numerous traditional dishes across Europe; from fish and chips in the UK, to bacalao in Southern Europe, and fish cakes in Denmark.

It is this high consumer that has fed a profitable industry, which has grown unchecked until the 1980s. By then fishing pressure outpaced cod’s reproductive ability to replenish the population, resulting in the collapse of stocks throughout European waters. Scientists have been clear for decades: only by implementing and enforcing strict catch limits can this species recover, yet the politicians charged with setting fishing limits have failed to take the necessary action and stocks continue to decline.

Cod in the Irish Sea is at the lowest level ever. The population in the Celtic Sea has been reduced by 88% since 1981. In the North Sea, too, cod overall has declined by 68% since the late 1960s and the population that lives off the west coast of Scotland has fallen by 94% since 1981. Every year during this period the amount of fish caught in this region has exceeded the scientific advice.

The two populations of cod in the Baltic Sea are not fairing any better. The European Commission has recently had to implement emergency measures to save the eastern stock from collapse, something that scientists warned of for years if fishing pressure remained too high. Overfishing has even impacted on fish species at a genetic level. Following the removal of large fish over generations some cod stocks are now maturing at smaller sizes[1].

All these stocks could, if properly managed, provide huge economic benefits to fishing communities. Instead, one common theme emerges. Year-after-year decisions are made to set quotas far above scientific advice and, year-after-year, cod populations decline. Yet each time decision-makers seem surprised when confronted with the inevitable results of their decisions.

The following sections look at this in more detail, telling the story of cod-stock collapses in three key European cod-fishing regions.

Fish of the eastern stock that once grew over a meter in length in the brackish waters of the Baltic Sea now reach adulthood at just 20cm[2] and, at poor hydrographic conditions, the eggs of young female cod have considerably lower survival compared to the eggs of larger females[3]. Scientists have calculated that reproduction is the lowest since recording began in 1946[4].  The minimum size Baltic fishers can land their cod catches is 35cm, but fishermen and scientists now struggle to find fish above this. Despite the clear evidence of the perilous state of this stock, EU Baltic Member States – the decision-makers for this region – have set fishing limits above the sustainable levels advised by scientists every year since 2013.

The steep decline currently being experienced by the western population is bad enough, but eastern Baltic cod is disappearing before our eyes. The impending collapse of this population led the European Commission, in July 2019, to announce emergency measures to save the stock. This resulted in the introduction of an immediate ban on all commercial cod fishing in most of the Baltic Sea until 31 December 2019. Yet, despite this drastic step, and once more against the advice of scientists, fishers will be allowed to catch them again in 2020, with 2’000 tonnes of cod permitted provided it is classed as ‘bycatch’.

It is unchallenged that one of the main causes of the critical situation of the eastern Baltic cod was decades of overfishing. Considering the many other man-made environmental stressors – low levels of oxygen and dead zones covering around 18% of the bottom of the Baltic Sea caused by eutrophication; Baltic Sea sensitivity to climate change due to it being a shallow sea basin; marine habitats destructions and seabed disturbance – the need to fish sustainably has never been so great.

North Sea
The current state of North Sea cod stocks also shows a failure to learn from past lessons. In 2006, cod stocks reached an all-time low, falling below the scientific levels deemed safe to allow continued exploitation. Scientists were clear that drastic measures would have to be implemented to rebuild the population and, for some years, measures were taken to help the stock recover. This so-called ‘Cod Recovery Plan’ consisted of strict catch limits combined with restrictions on where vessels could fish and the number of days that could be spent at sea. This worked. Slowly but surely, the stock started to recover and reached the sustainability threshold in 2016. Yet despite all this hard work, at the first sign of recovery the plan was abandoned, and quota was once again increased to unsustainable levels. This gamble on cod’s ability to recover has backfired and stocks are once again declining.

The impending departure of the United Kingdom from the EU may also impact attempts to end overfishing of cod in the North Sea. The draft UK Fisheries Bill, published early in 2019, was much weaker in its sustainability commitments than the EU’s Common Fisheries Policy that it was designed to replace. This is particularly worrying given that the UK is by far the biggest fisher of cod in the North Sea.

Celtic Sea, Irish Sea and West of Scotland
Since 2000, catches of the Irish Sea Cod stock have been low and continue to decline[5]. According to scientists, it’s at its lowest levels since the 1990s. And yet in 2018 fishing pressure was actually allowed to increase. A similar pattern has been observed in the West of Scotland[6] and Celtic Sea[7] cod stocks which have been declining to critically low levels since the early and late 1990s respectively.

Back in 2011, Dr Paul Connolly of Ireland’s Marine Institute reacted to the European Commission’s recommendation that the cod fisheries in the Irish Sea and West of Scotland should close, saying:

“Continuous overfishing has led to a collapse in cod in both these areas. The signs have been there for years and scientists have repeatedly warned quotas must be cut but fisheries ministers have time and time again ignored us. We do not know now whether the stocks will recover.”[8]

Years later and scientists still continue their need to repeat their same key messages: that the only way for overfished cod populations to recover is to reduce fishing pressure and close the fishery in the Celtic Sea and West of Scotland completely (though it should be noted that in 2019 had a small TAC advice of 116t).

One of the major constraints to the recovery of cod in the EU’s Western Waters is that as their stocks have dwindled, they have been usurped in terms of their economic importance by other fish stocks. Where cod would have once been the prized target, now they are often considered as an inconvenient bycatch – an annoyance that hampers opportunities to catch other, more valuable species. In the Irish Sea a species of burrow-dwelling prawn called Nephrops is now one of the most coveted catches for fishers. While in the Celtic Sea cod is seen as getting in the way of the industry’s efforts to maximize the exploitation of haddock, whiting and other species, such as monkfish, megrim, and hake for example.  Cod nevertheless remains a superior eating fish in high demand, and if stocks recovered it would once again be highly profitable.

Added complications
EU fisheries policy remains blinkered by a focus on short-term economic returns. This results in fisheries management focused on maximizing the exploitation of commercially important stocks, rather than on an ecological approach that recognizes the interactions of species through food webs and the importance of predatory fish, like cod. Myopic decision-making also continues to ignore the potential long-term value of restoring cod stocks to both the fishing industry and associated businesses along the supply chain, consumers and ecosystems. This makes these fish the victim of a downward spiral of poor choices.

Many of the fisheries in the EU are called mixed fisheries because they catch a variety of species throughout the year. Differences in the biology and abundance of those fish species mean that, to manage all stocks sustainably, fishing should be limited by the needs of the most vulnerable species and therefore halted once that stock is depleted, even if it means available quota from other stocks goes unexploited. Clearly this is something that no politician is willing to take responsibility for. In most of the EU mixed fisheries the limiting stock is now cod.

Moreover, the poor monitoring and control of fisheries means that unwanted cod continue to be thrown back into the sea dead. This does nothing for the recovery of their stocks and seriously undermines scientists’ ability to monitor the health or these stocks, further confounding their sustainable management.

Climate change
Climate change is causing sea temperature to rise, impacting the resilience of the ocean and the species within it. Cod is a good example of this as its feeding patterns, reproduction and spawning times are all linked to temperature, with scientists also documenting a decline in size linked to warming waters. With Baltic stocks, for example, evidence has shown that environmental factors have an impact on the resilience of cod[9], adding another burden on a species that’s already in trouble due to human fishing pressure. In the face of climate change it’s more important than ever to limit the direct human impacts on stocks, such as cod, by ending overfishing and taking a more sustainable approach – one that creates a resilient fishery able to buttress the impacts of other factors.

In conclusion
The decline of EU cod stocks[10] was the predictable and inevitable outcome of politicians, heavily lobbied by industry, repeatedly setting catch limits above the levels advised by scientists. These decisions favoured short term gains at the expense of management measures that would provide long-term ecological and financial sustainability.  Due to falling cod numbers, several fisheries may now have to be closed in order to comply with the CFP’s 2020 legal deadline to end overfishing. This is an extremely frustrating outcome as it was both foreseeable and avoidable. The last few years should have been used to slowly and pragmatically bolster these stocks. Instead they have been squandered in efforts to maintain the status quo. By ignoring the scientific advice, politicians, including the EU Commission and Fisheries Ministers, have learnt a very expensive lesson – you cannot negotiate with nature.

Other factors, such as climate change, are to blame, too, but what we can control is overfishing as this will increase the health and strength of these stocks so they are better placed to withstand the impacts of factors we have less direct control over. Moving forward, Europe needs a more joined up approach that considers the impacts of fishing on marine ecosystems and recognises the need to limit the pervasive reach of fisheries if we are going to restore fish populations and maximise ocean resilience.

Most pressingly, fisheries ministers must use their power and influence to ensure Total Allowable Catch limits set at the upcoming December Fisheries Council do not exceed scientific advice. That’s all that’s needed to end overfishing in the EU.