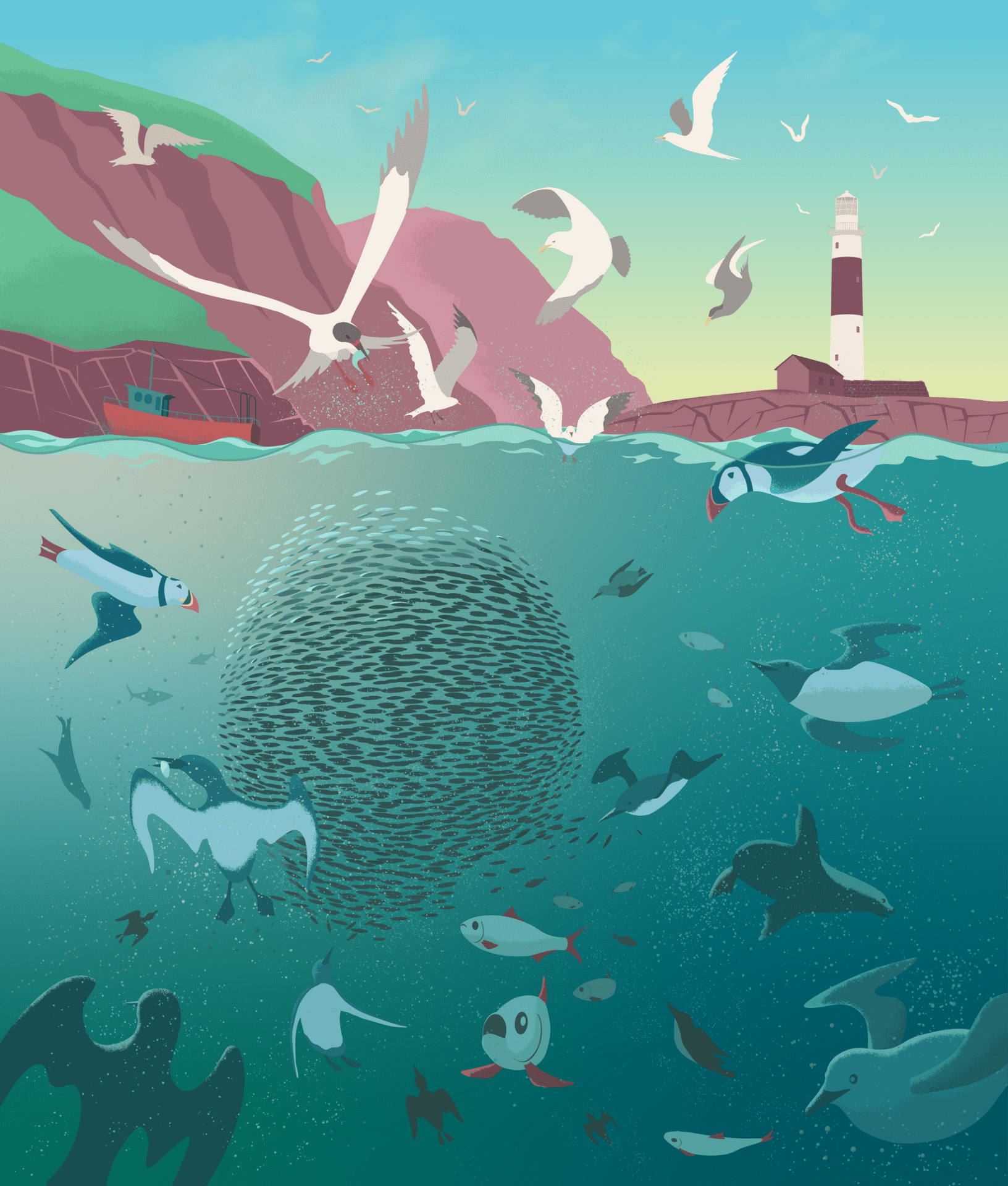 “The herring are not in the tides as they were of old;
My sorrow! for many a creak gave the creel in the cart
That carried the take to Sligo town to be sold,
When I was a boy with never a crack in my heart.”

From the Meditation of the Old Fisherman by William Butler Yeats

The herring are not in the tides as they were of old. Three out of the five herring fisheries that Irish fishers are active in have collapsed. Fisheries scientists warn that no fishing should take place in those fisheries in 2021. This includes two of Ireland’s most important herring fisheries, in the Celtic Sea and North West of Ireland. Ireland dominates fishing quotas in both fisheries. The ongoing state of Irish herring populations is seriously impacting on sea life around our coast and affected fishing communities.

Herring are a cornerstone of Irish marine ecosystems. Most animals in the seas feed on herring at some stage of its lifecycle – from eggs to juveniles and adults. Adult herring can form impressive shoals that attract a frenzy of seabirds, whales, dolphins and predatory fish. Herring is an important part of the diet for at least eight Irish seabird species[1]. This includes rare and internationally important seabirds like Roseate Tern and Manx Shearwater and declining species like Kittiwake[2]. Some whales rely heavily on herring in Irish waters[3]. Young herring and sprat make up half of the diet of Fin Whales[4]. Humpback whales are even more reliant on herring and sprat as they make up 70% of their diet. Herring are important prey for many commercial fish stocks too. Many whitefish stocks for example are attracted to herring spawning grounds to feed on herring eggs. The collapse of herring stocks around our coast is obviously a serious threat to the web of life in our seas. The situation becomes even more severe when the poor state of other fish species is considered as well as the international importance of Irish waters for breeding seabirds and migrating whales.

The decision to close commercial herring fisheries while necessary, is disastrous none the less for effected coastal communities, who are dependent on the jobs created either directly or indirectly in fishing and processing. The timing really could not be worse considering the impact Covid19 has had on markets and the looming long-term implications of Brexit. What is probably most concerning about the collapse of our herring stocks is that it was predictable.

Historical records tell of vast herring shoals that used to inundate bays and harbours like a great silver tide. Irish Naturalist, William Andrews described spawning herring in Derrynane, Co. Kerry, an area where Herring are now absent: “The harbours of Sneem, Kilmachalogue, and the Ardgroom were alive with fish. Several fine nights I visited the little herring fleet, which inside the harbour with their little shallow nets, were taking fish in abundance…. During a south-west breeze, the fish were seen rushing in bodies in every part of the harbour, and so numerously, that from the rocky ledges and at the shores they were taken by hand nets and baskets.” Andrews also reports that that about 80 tonnes of fish were brought into Galway market in one day, all captured about the pier and far up in the inlet of Oranmore. A large haul for small boats in an area which doesn’t support a fishery today.  John Molloy in his book ‘The Herring Fisheries of Ireland’[5] describes large winter shoals of herring that would gather off the Stags of Broadhaven, Co. Mayo during the 1960s and 1970s. However, they were heavily exploited and disappeared during the 1980s. 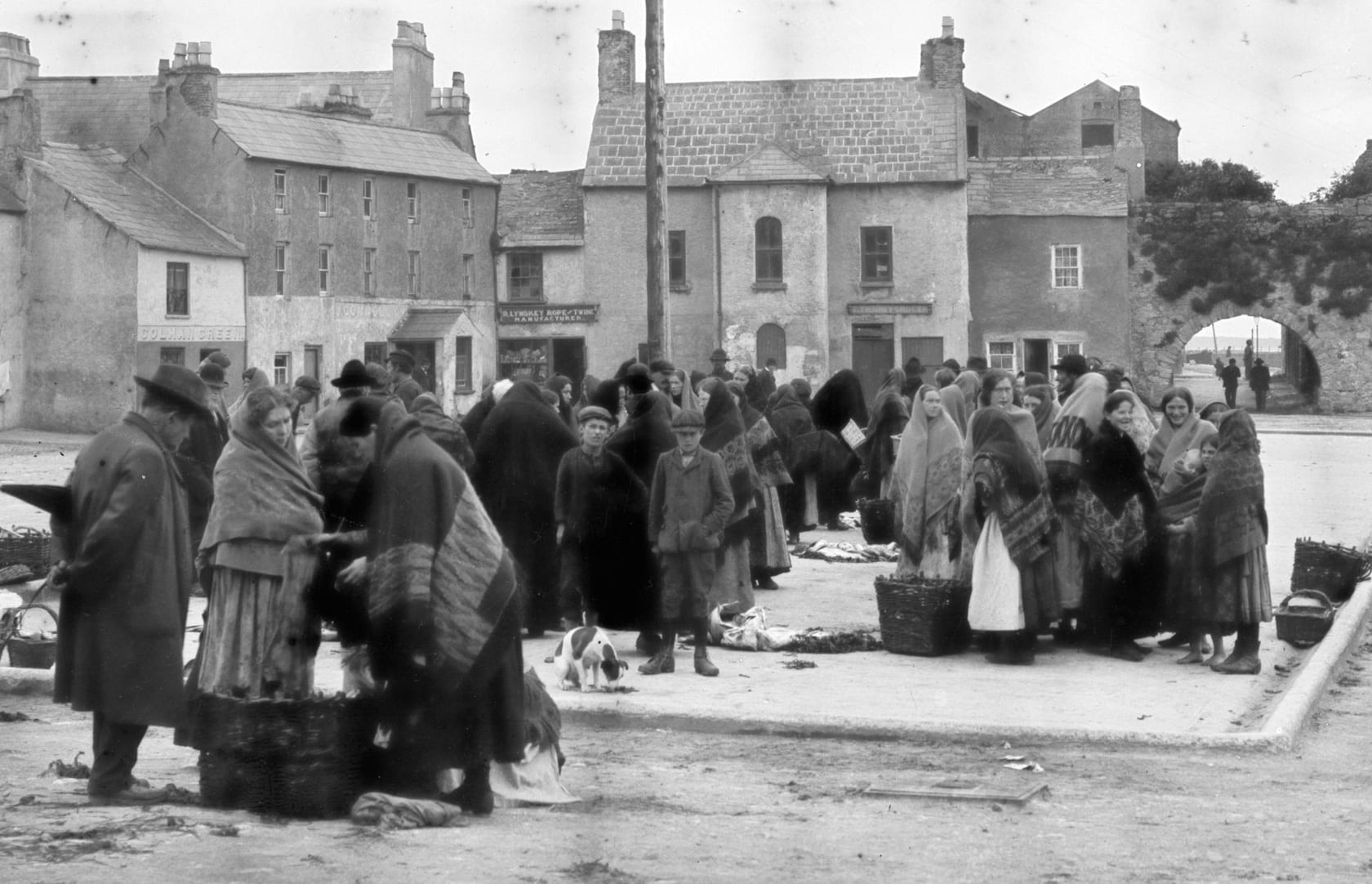 The industrialisation of commercial fisheries in the 1960s, coupled with growing demand in continental markets, saw herring landings increase with Irish and foreign fleets from Germany, the Netherlands and the Soviet Union landing large quantities of herring in ports from Dunmore East to Castletownbere, Dingle, Rossaveal and Killybegs. Herring were so plentiful that no measures were in place to protect the stocks. The ‘free fishing era’ ended when all the major herring stocks began to decline in the 1970s. In 1974 the first herring quotas were introduced. Fishing industry representatives resisted these new restrictions arguing that their quotas were far too low. The fishing sector having reached a high-water mark driven by overfishing could not now adjust to the lower catch levels being advised by fisheries scientists, without taking a financial hit. The concerns of a boat owner paying off bank loans or a factory owner contemplating laying off staff are not hard to sympathise with.

The Irish quotas in 1974 and 1976 for Celtic Sea herring were never caught because like other stocks, herring were declining even more rapidly than scientist had imagined. The stocks in the Celtic Sea and North West of Ireland collapsed and were closed in 1977 and 1978 respectively and didn’t reopen until the early 1980’s. Irish herring stocks have never recovered fully, and landings have again been declining sharply from an Irish quota of over 32,000 tonnes in 2012 to just over 1,000 tonnes in 2020. A tiny fraction of what currachs and handwoven baskets have brought to Irish markets in the distant past. 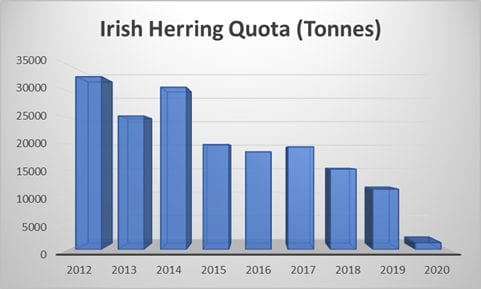 While the collapse of Herring stocks in hindsight seems depressingly predictable the contributing factors are complex. Without a doubt overfishing has been the biggest driver. The failure of fisheries Ministers to follow the scientifically advised quotas, in combination with illegal landings and the discarding of dead juvenile and unmarketable fish overboard have all contributed to overexploitation. The broader impacts of commercial fishing on marine ecosystems and habitats including herring spawning grounds and juvenile nursery areas have also not helped. Considering that Irish herring stocks sit on the southern limit of the species distribution it is also likely that rising water temperatures driven by climate change will further complicate things. All these issues are acknowledged by fisheries scientist but to date they have been poorly reflected in actual management.

This week EU Member States and the European Commission will meet to discuss fishing quotas for 2021 and the implications of a potential Brexit deal on the future of European fisheries management.  This year’s talks will also be held in the context of the EU’s failure to meet its legal obligations under the Common Fisheries Policy to end overfishing by 2020. If past years negotiations are anything to go by, it seems likely that the Irish Government and other Member States will resist following the scientific advice when that means reduced fishing opportunities for the year ahead. Looking back over the last seventy years it’s hard to understand how we can so willingly and unquestionably repeat the same mistakes.

BirdWatch Ireland have recently published our own assessment of Irelands implementation of Common Fisheries Policy – Common Fisheries Policy 2020 – A Discarded Opportunity. We have made policy recommendations which we believe would result in the recovery of fish populations such herring, benefitting fishing communities and the broader marine environment. We will continue to work with all stakeholders to try to progress the sustainable management of Irish fisheries and the conservation of Irish sea life. The expansion of Ireland’s network of Marine Protected Areas can contribute to the achievement of both objectives.

Title Image: A shoal of Herring with sea life and inshore fishers off Rockabill, Co Dublin by Jacek Matysiak