We’ve got Corncrakes covered on the Mullet!

BirdWatch Ireland has been working to save Corncrakes in Ireland for over thirty years, with support and help from our BirdLife International Partners the RSPB.

Back in 1991, two young Corncrake fieldworkers were employed by BirdWatch Ireland to draw attention to the dire plight of the fast-disappearing Corncrake. Dr Anita Donaghy, now BirdWatch Ireland’s Assistant Head of Species and Land Management, was one of them.

“In those days, relatively little was known about the ecology of this secretive long-distance migrant, except that they were confined to areas where mowing was late, such as on the floodplain of the Shannon (the Callows) where drainage ditches allowed  the meadows to dry for mowing in late summer. But through dedication and many days and nights of field research, we have built up and disseminated our knowledge and understanding of all the key components of the management these iconic birds need,” Anita notes.

“Now we know there are three essential ingredients – mowing fields after the second broods hatch in early August, mowing fields from the centre out with margins left along the edges and providing areas of early and late cover to give shelter at the start and end of their breeding season. Gradually we convinced the State to fund schemes for Corncrakes and, along the way, others have joined us. For example, one of our closest allies on Tory Island, Anton Meenan, has worked with BirdWatch Ireland to improve the areas of early cover on his land.”

“The early cover patches we have worked so hard to create are always the first place to host a Corncrake on the island,” according to Anton.

On our own reserves on the Mullet Peninsula in Co Mayo, we have created a mosaic of species-rich grassland and early/late cover patches, providing prime habitat at all stages of the breeding season. Last year (2020), NPWS confirmed seven calling males in this area, four of which were on BirdWatch Ireland’s reserve at Termoncarragh Meadows. 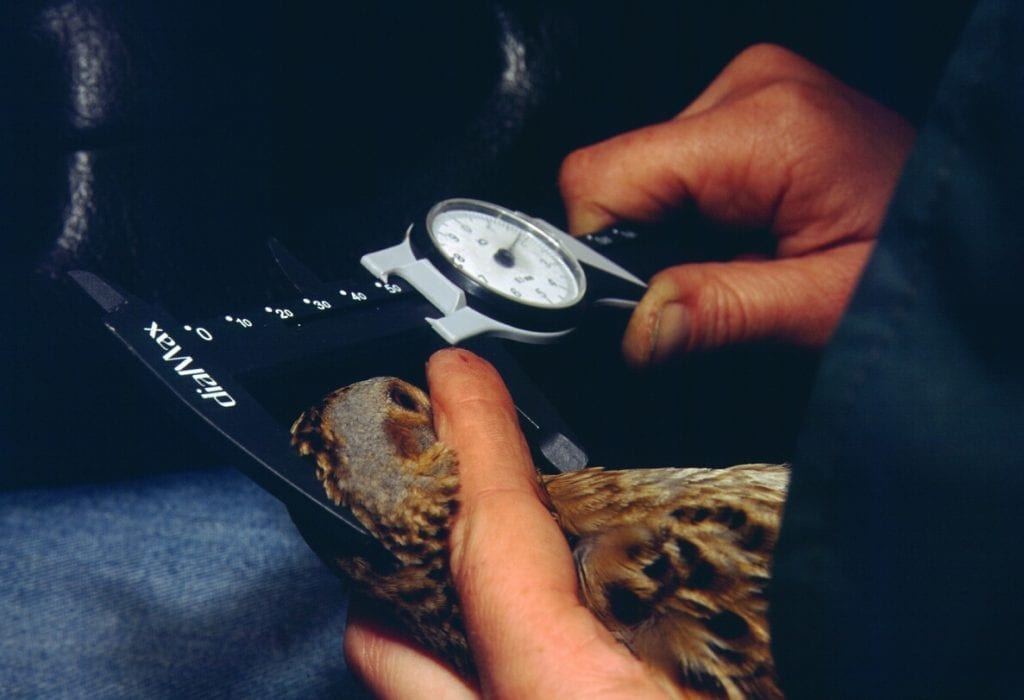 It has taken a huge amount of research over many years to inform the Corncrake conservation methods used in Ireland and Britain today.

“Creating early cover patches has been key to our successful Corncrake management,” said Dave Suddaby, BirdWatch Ireland’s Reserves Manager. “The most important thing about early cover vegetation is its structure – it must be tall enough to shelter birds but open enough to allow them to move easily through it.

“Several herb species can be the mainstay of an early cover patch: nettles, hogweed and cow parsley are good examples of species with the right structure. It’s best to work with the species found locally or which are easiest to grow in the local conditions. Nettles and hogweed are good choices as tall-herb species within the right soil structure, especially where that can be enriched with farmyard manure or similar.

“Over the years we have worked with local farmers who have provided us with manure and a seed source. The seeds of nettle and hogweed are collected by hand and are then broadcast into the enriched soils; together with the other grasses and herbs that grow up alongside. These then develop as cover areas over a series of years, providing ideal habitat both early and late in the season.

“It is important though that these do not become thick and impenetrable, and so each autumn these areas are flail-mown to maintain an open structure the following spring, thus negating the need to use herbicides. This management provides habitat for an abundance of invertebrates which Corncrakes feed on.”

However, we are always trialing new and better ways of providing optimum habitat for Corncrakes and we liaise closely with our RSPB colleagues in this respect. Recent studies indicate that the larger the cover area, the better, so at present, we are experimenting with creating large plots of cover over a whole field.

“We know from radio tracking studies that female Corncrakes far prefer large cover areas in which to raise their chicks over grass which is cut for hay or silage,” says Anita. “Therefore covering entire fields with this type of vegetation could allow more pairs to nest there. Whilst this might not be feasible for farmers who need the grass crop, on a nature reserve, where biodiversity is the focus, we can experiment with this. However, there is a financial cost to this, and with support from the Heritage Council, we have kept costings low; however, that does mean that the cover areas take more time to develop. Even so, it is proving favourable to Corncrakes, with two males holding territory within the field last summer.”

However, at this reserve not only have we protected Corncrakes, we have created a biodiversity haven for a wealth of other wildlife too. This work was initiated with funding support as part of an EU Termoncarragh Life project for Annex 1 Species between 2001 and 2005, and thereafter by other supporters, particularly the Heritage Council. 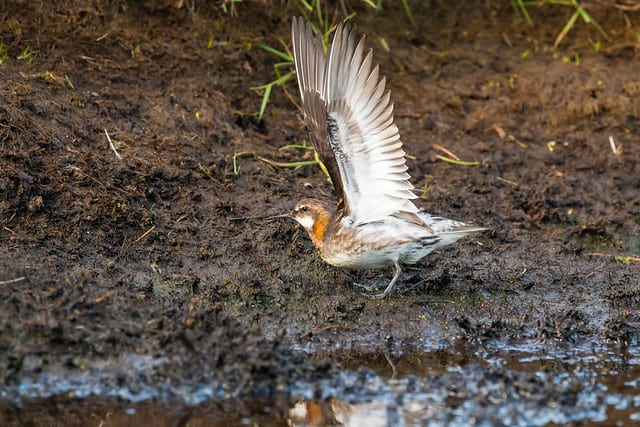 Red-necked Phalarope is one of the rarest breeding birds in Ireland, and one of many species to have benefited from the work on our Mayo reserves.

The restoration of the pool systems at our Annagh Marsh reserve, overseen by Dave, has, after an absence of 30 years, seen the return of successfully breeding Red-necked Phalaropes. These beautiful and enigmatic birds are one of seven rare or endangered breeding species to occur in the marsh that are Red-listed in our newly updated all-Ireland list of Birds of Conservation Concern (BOCCI 4).

Lapwing is another of these highly threatened Red-listed species, and our active management has seen their breeding population grow from zero to 26 pairs over the last 10 years, assisted by the erection and management of a predator-proof fence and the help and cooperation of local farmers. With improved productivity, breeding Lapwings have returned to the surrounding area. 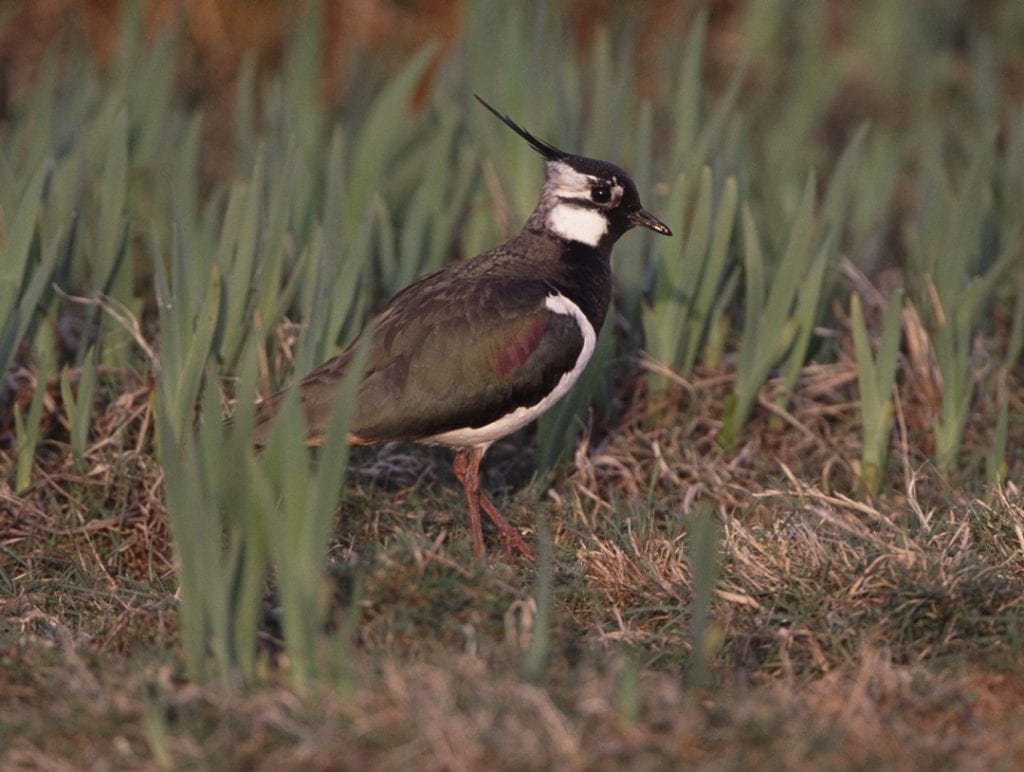 Breeding Lapwing have been lost from many parts of Ireland, but their numbers are increasing on our Mayo reserves and surrounding farmland.

Our management at the marsh and nearby at our Termoncarragh Meadows reserve is also providing a haven for a suite of rare and vulnerable invertebrates, such as the Belted Beauty moth, the Red-banded Sand Wasp and the Irish Click Beetle Selatosomus melancholicus. A recent study by University College Dublin confirmed that our reserve areas hold the highest numbers of the rare and endangered Great Yellow Bumblebee on the Mullet Peninsula, which is home to the only remaining population currently known in Ireland.

At BirdWatch Ireland, we are working tirelessly to protect biodiversity through our project work, our reserves and our advocacy for nature.

If you would like to support this vital work, please become a BirdWatch Ireland member

You can read more about our Annagh Marsh and Termoncarragh Reserves, and about where to go birdwatching in north-west Mayo, in the articles below, taken from our membership magazine ‘Wings’. 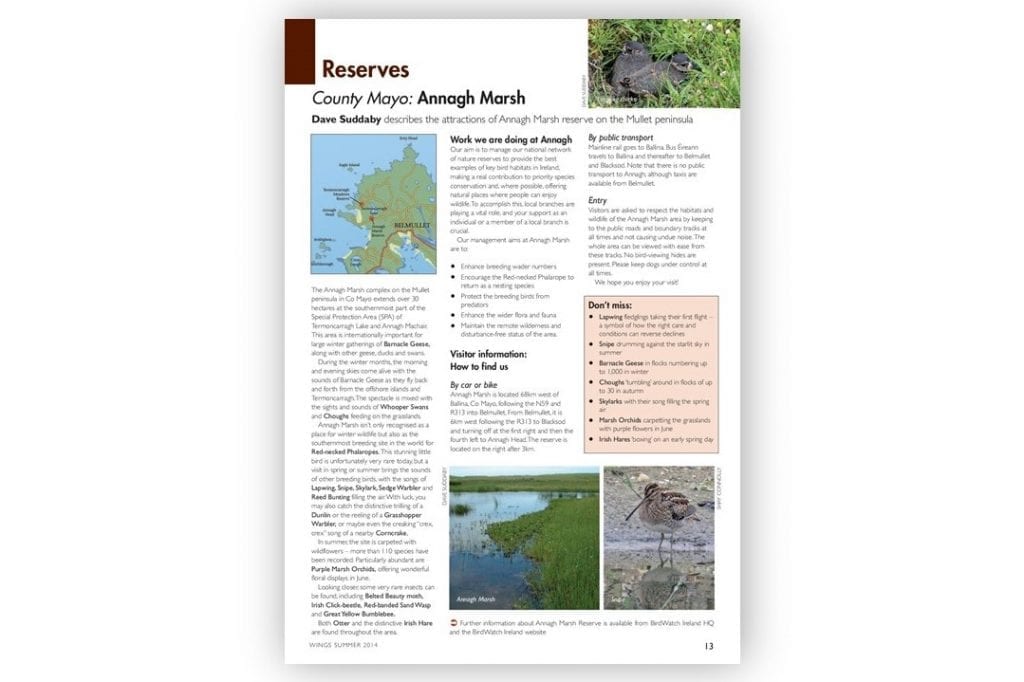 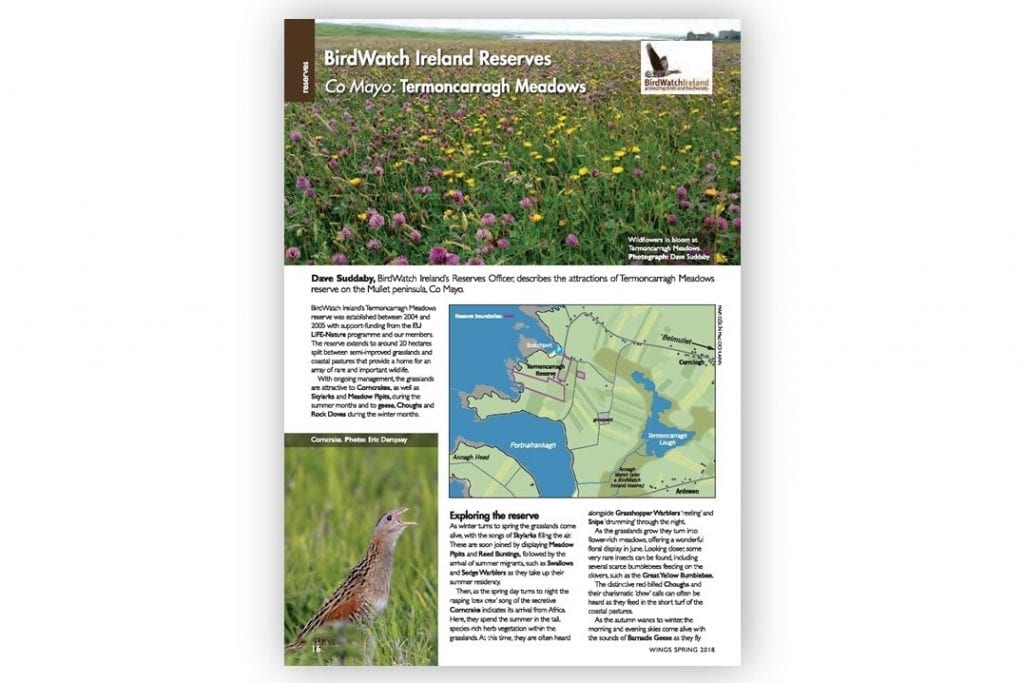 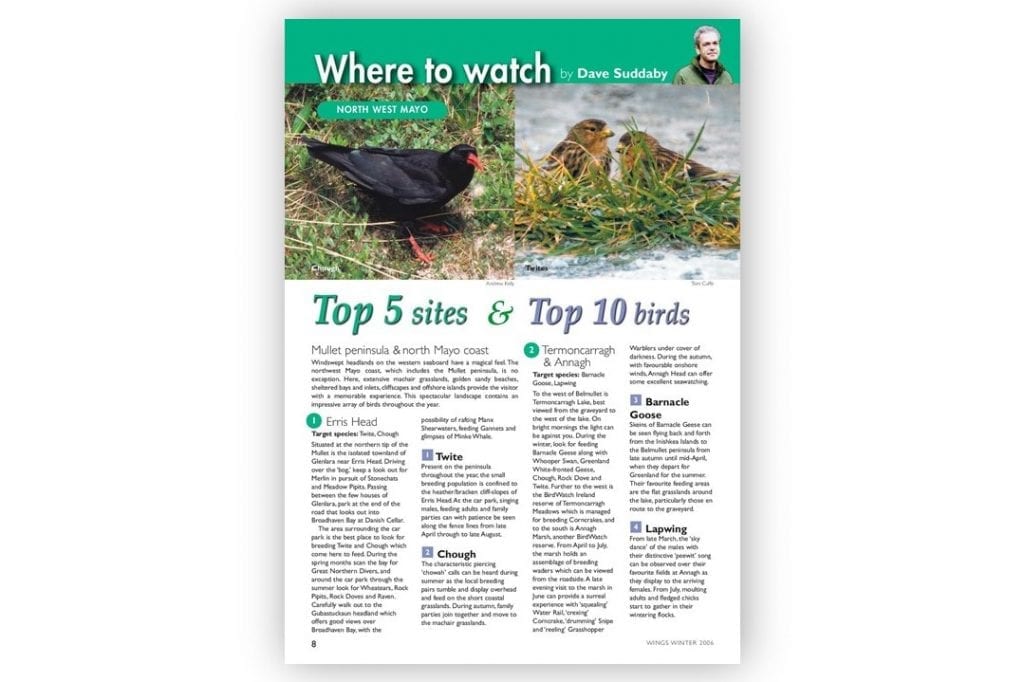