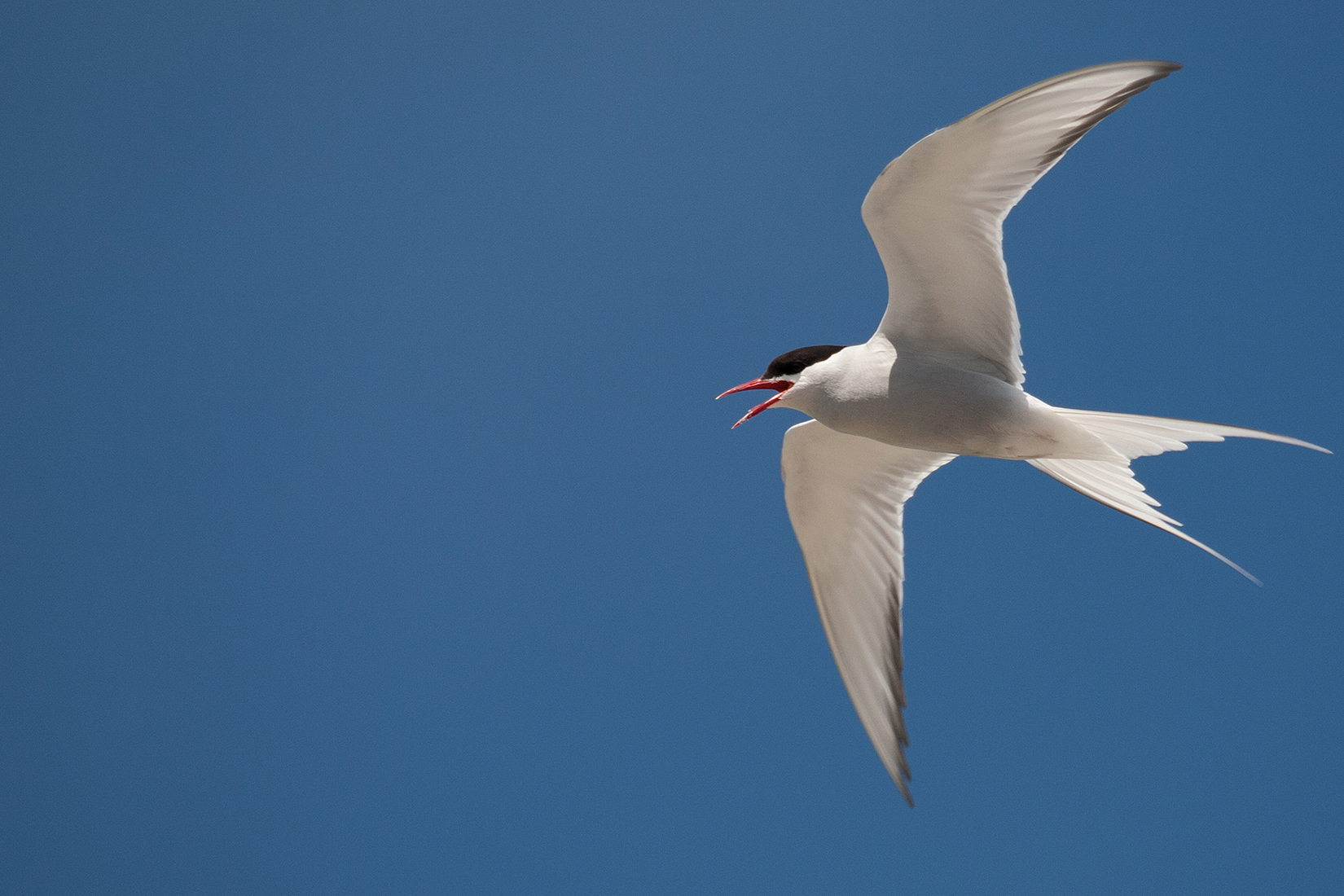 For the first time on record, this year Arctic Terns have successfully raised chicks on the main island of Dalkey, south Co. Dublin, giving the vulnerable colony, which is protected by BirdWatch Ireland, a much-needed lift. So far six chicks have taken to the wing from the island, with a seventh expected to take its first flight over the next few days.

This is much a needed triumph, as although Arctic Terns have in the past successfully reared young on both Maiden Rock and Lamb Island (also part of the Dalkey Island archipelago), prior to this year chicks have never survived to take flight, or “fledge”, on Dalkey Island itself. This is most likely due to the effect of predators, and combined with unseasonable weather regularly flooding the other two islands in the archipelago, there were great concerns for the future of this dwindling Arctic Tern colony. Conservationists’ efforts to remove at least a large proportion of the rat population on Dalkey Island, paired with the tenacious protection of the tern parents, have allowed these chicks to survive and take flight.

On top of the success on Dalkey Island, Lamb Island has also confirmed six fledglings, but the true figure is thought to be higher. A further nine chicks are currently waiting in the wings.

The Arctic Tern, nicknamed ‘sea-swallow’ after its long tail streamers and buoyant flight, is the world’s greatest long-distance traveller, migrating further than any other animal. During our summer months, they breed in Ireland and other areas of the Northern Hemisphere and then fly all the way to the Southern Ocean, off Antarctica, where they wait out the northern winter. This means that they see more daylight each year than any other creature on the planet.

Throughout the course of their lives Arctic Terns can travel more than 3 million kilometres; an especially impressive achievement for a bird that weighs just 100 grams. To put the overall distance which these birds travel into context, they migrate the equivalent of almost 4 round trips to the moon over the course of their lives (25 – 30 years).
“All of us at BirdWatch Ireland are thrilled with how well this small but resilient colony has done this year,” said Tara Adcock, BirdWatch Ireland’s Dalkey Tern warden. “Prior to this season, chicks surviving past two weeks, never mind fledging from Dalkey Island itself, was unheard of! This is thanks to management from BirdWatch Ireland staff and volunteers, support and funding from the EU LIFE Roseate Tern Recovery Project and Dun Laoghaire – Rathdown County Council, advice from the RSPB and the tenacity of the Arctic Tern parents themselves.

“This project truly shows that if you give nature a chance, it can bounce back. It has been a real pleasure to work to protect these phenomenal birds. It’s incredible to think that in a few weeks, these chicks along with their parents will undertake the longest migration in the natural world, all the way to the Antarctic!”

Arctic Terns are Amber-listed on the list of Birds of Conservation Concern in Ireland, meaning that they are a particularly vulnerable species. One of the reasons for this is that the availability of suitable breeding habitat, namely undisturbed rat- and mink-free offshore islands, is quite limited. To tackle this, BirdWatch Ireland carried out rat-baiting across Dalkey and Lamb Island before this year’s nesting season. Canes were also erected across a portion of Lamb Island to exclude gulls from the tern colony. This work was carried out as part of the Dalkey Tern Conservation Project, which is funded by the EU LIFE Roseate Tern Recovery Project and Dún Laoghaire–Rathdown County Council.

With continued management and funding we hope to see this small but mighty tern colony flourish over the coming years, growing in capacity from its current level of 29 pairs.

It is also hoped that eventually another species, the elegant Roseate Tern, one of Europe’s most endangered seabirds, will also be persuaded to nest at Dalkey. Europe’s largest colony of Roseate Terns (holding approximately 50% of Europe’s breeding population) is on Rockabill Island, off the coast of north Co. Dublin, so the birds would not have far to travel. Roseate Terns prefer to nest in colonies where other tern species are already established, so the presence of a thriving Arctic Tern colony at Dalkey could prove very attractive for them. By providing these birds with multiple nesting habitats, such as at Dalkey, we can help to safeguard their future.