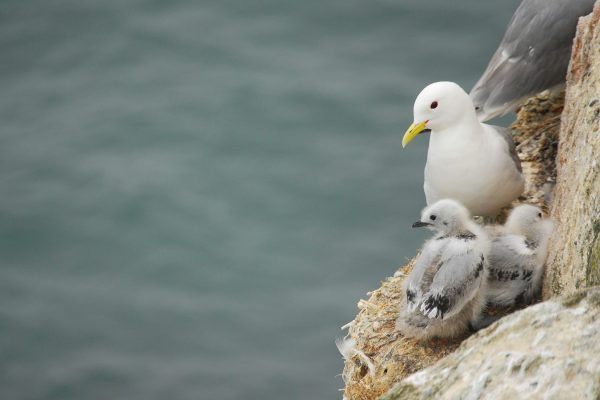 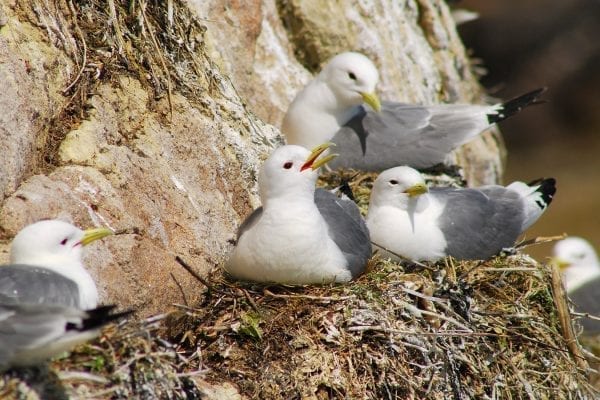 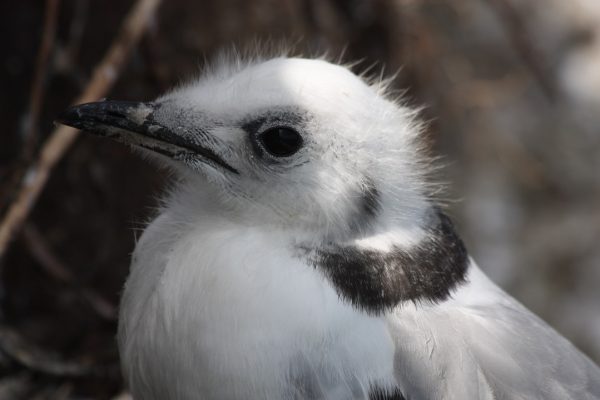 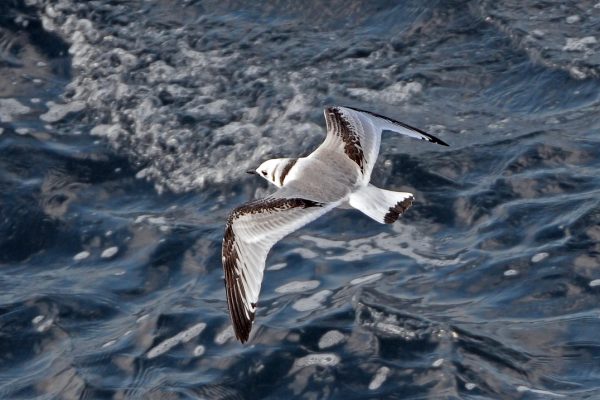 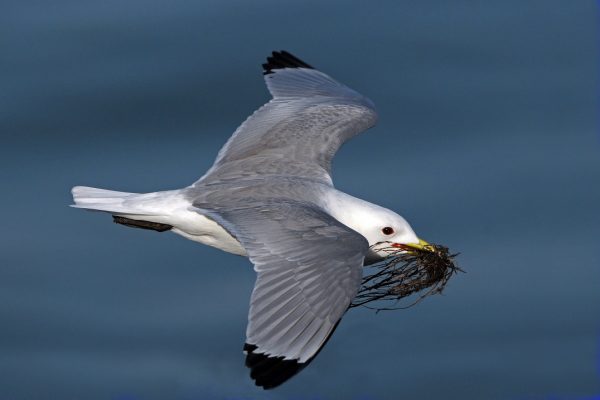 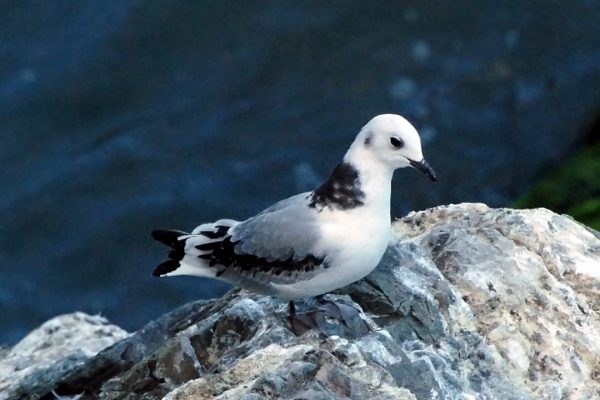 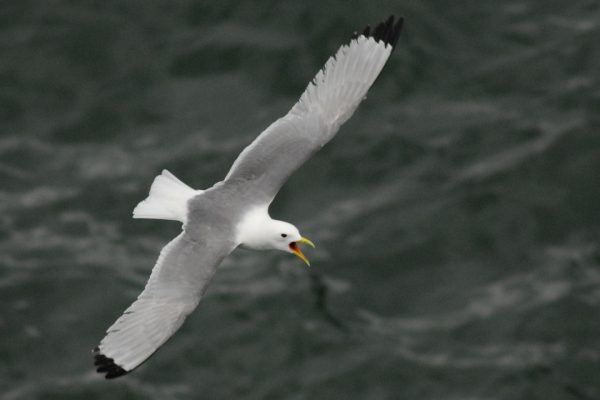 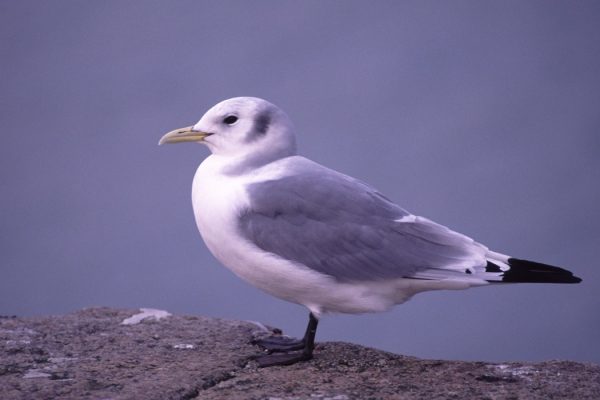 Summer visitor to steep coastal cliffs along all Irish coasts. Disperses to the open ocean in winter and less frequently seen.

A small gull, slightly larger than Black-headed Gull, which is basically grey above and white below. Adults are easily told apart from other gull species by the solid black wing tips, showing no 'mirrors' (white at the wing tip), and two toned grey upperwing. Adult birds have a yellow bill and dark legs. Adults show white heads in the summer and a dark patch behind the eye in the winter. Juvenile and first year birds have a bold dark 'W-pattern' across the wing and a dark tail band, although these features can be much faded by the first summer/second winter. Second year birds are similar to adult birds but can show black fringes to outer primaries, black on the bill or winter head patterning in the summer months.

Noisy at colonies, giving a nasal call resembling its name. Can often be heard clearly over the sounds of other birds at seabird colonies.

Forms colonies, sometimes thousands strong, often with other seabirds. Breeds on steep sea cliffs where it builds a nesting platform on the most vertical and sometimes improbably steep areas. Will occasionally use man-made structures such as old buildings, for example in Dunmore East, Co. Waterford.

Breeding seabirds are monitored through surveys carried out every 15-20 years, the last was Seabird 2000, which was undertaken between 1998 & 2002.

Small breeding colonies can be found at most headlands along all Irish coasts, with the largest (about 7,000 pairs) found along the Cliffs of Moher. 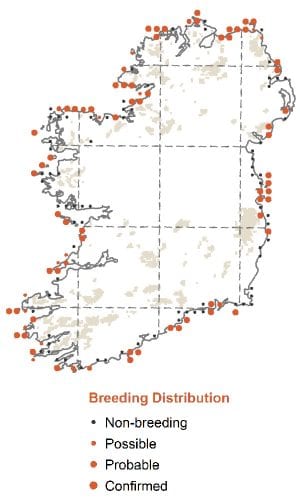 Quite common at sea outside of the breeding season. 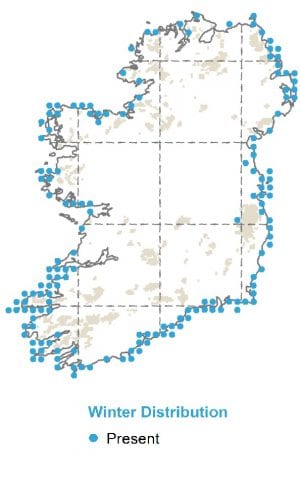 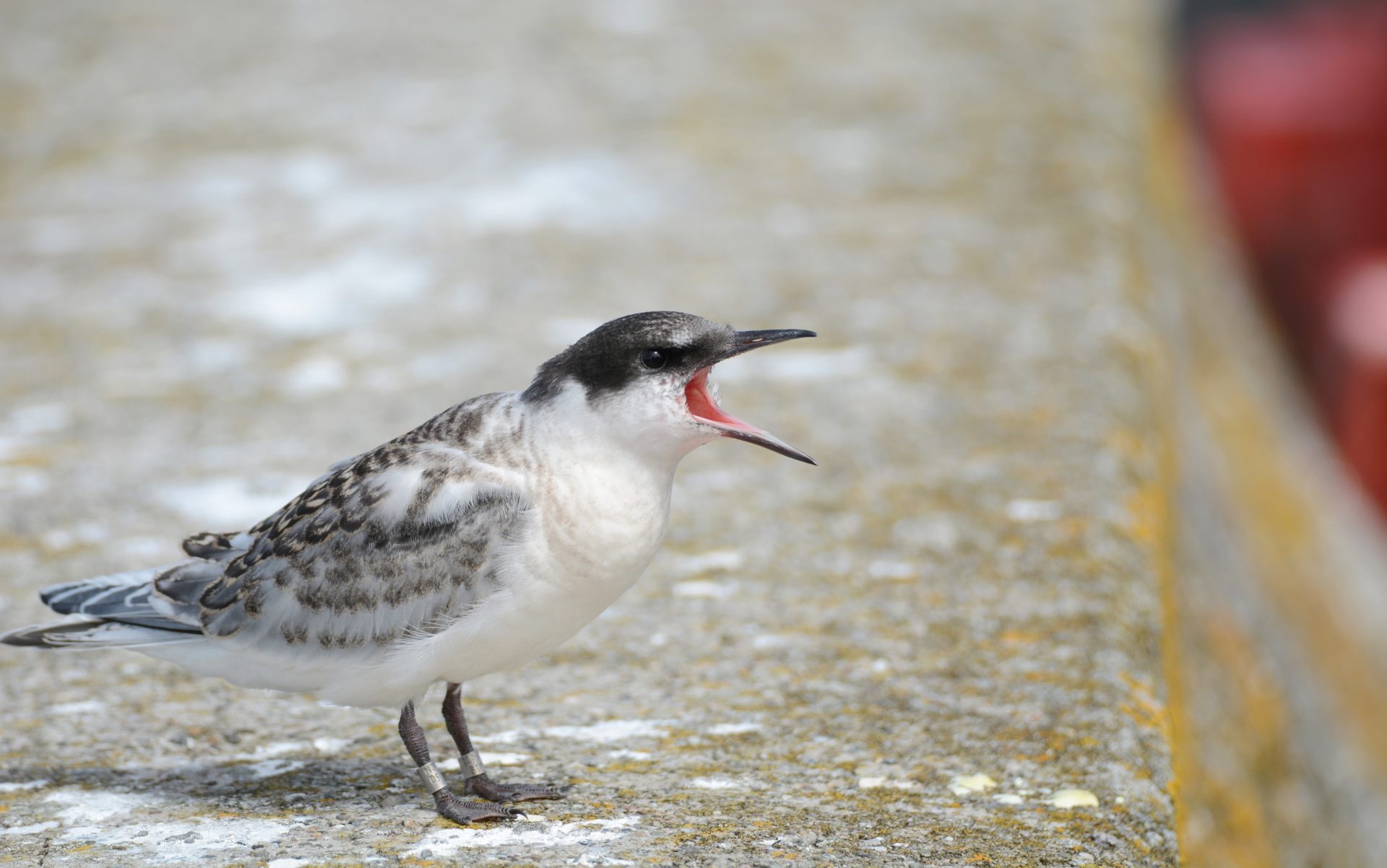 All Grown Up and Ready to Ring

Life continues to move fast out here on Rockabill. This year we recorded a record number of Roseate Tern nests on the island. That is a lot of chicks to watch over! Not only that, but each of these chicks need to be ringed with a uniquely coded leg ring so that we can continue to monitor them after they migrate and when they hopefully return to Rockabill to nest in the years to come. In no time at all our tiny tern chicks had shed their fluffy down feathers and had grown into their more elegant flight feathers. 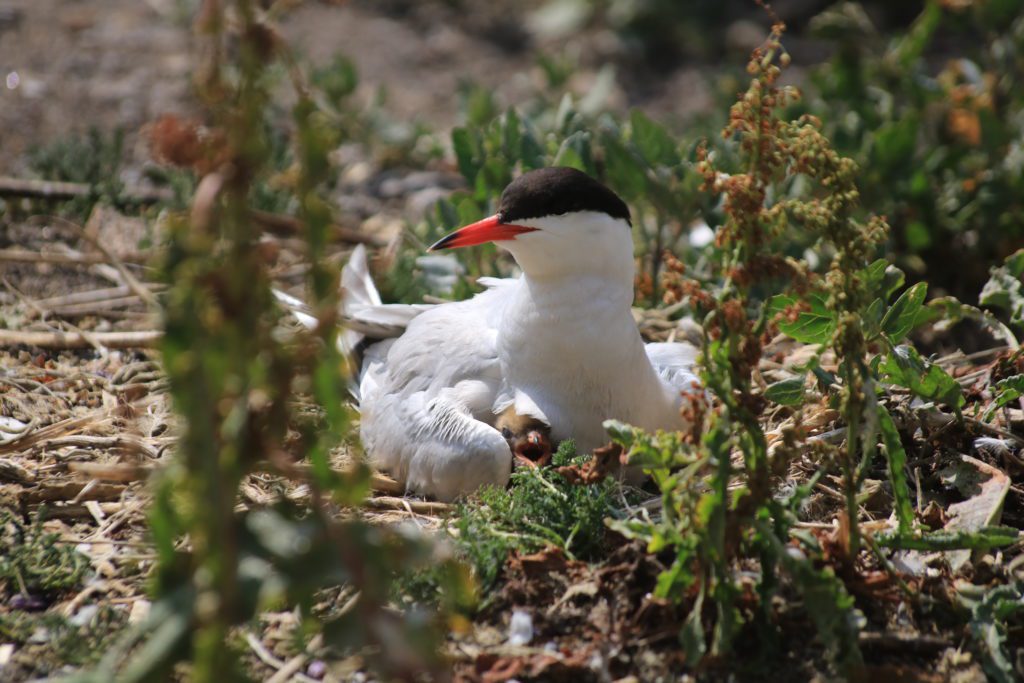 Common tern chick cosy under their parent on a cold day. Photo by Emma Tiernan, taken under NPWS license. 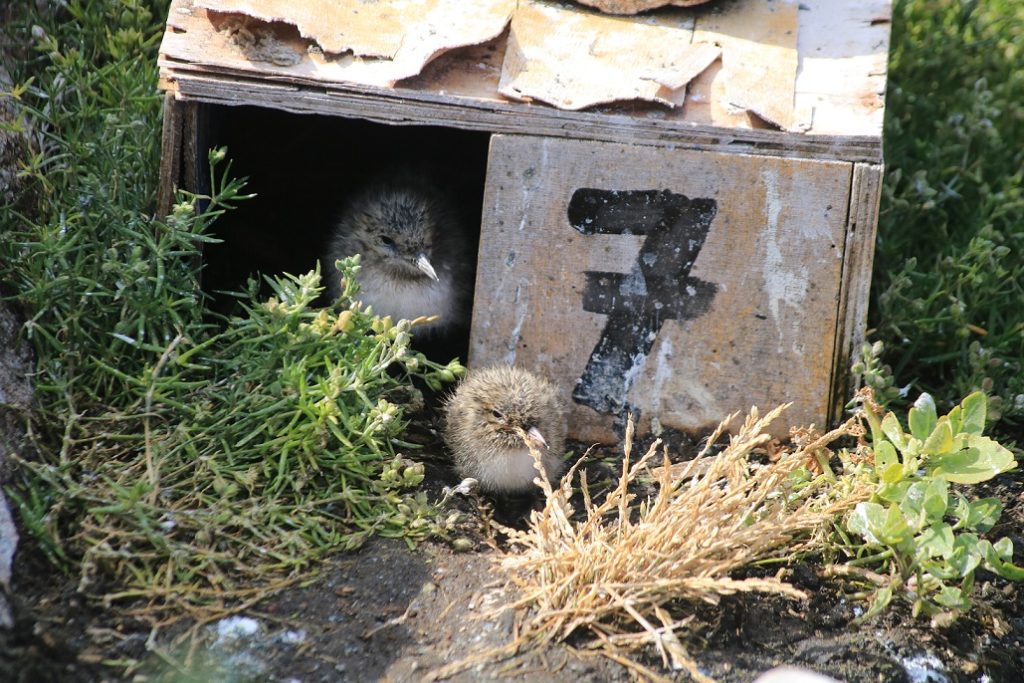 Roseate tern chicks from the same clutch stepping outside their nest box for the first time. Photo by Emma Tiernan, taken under NPWS license.

It’s not just the terns, the Black Guillemots and Kittiwakes have also been getting very big, very fast. 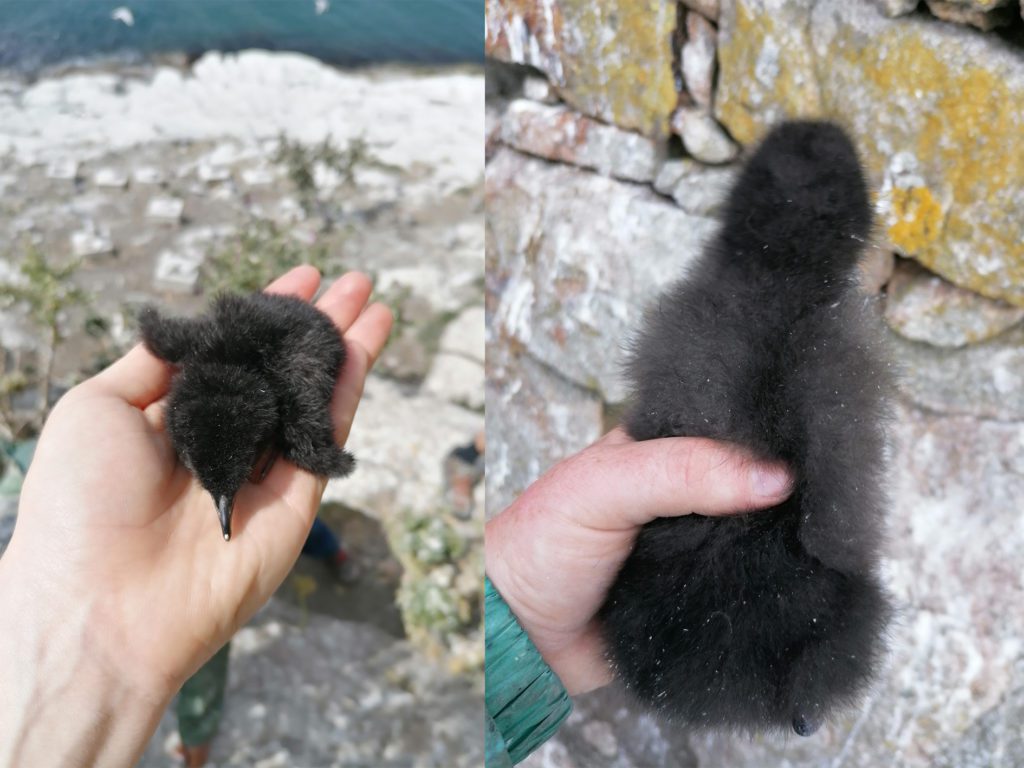 Black Guillemots at 5 days old (left) and over 15 days old (right) before getting weighed for biometrics analysis. Photos by Emma Tiernan, taken under NPWS license. 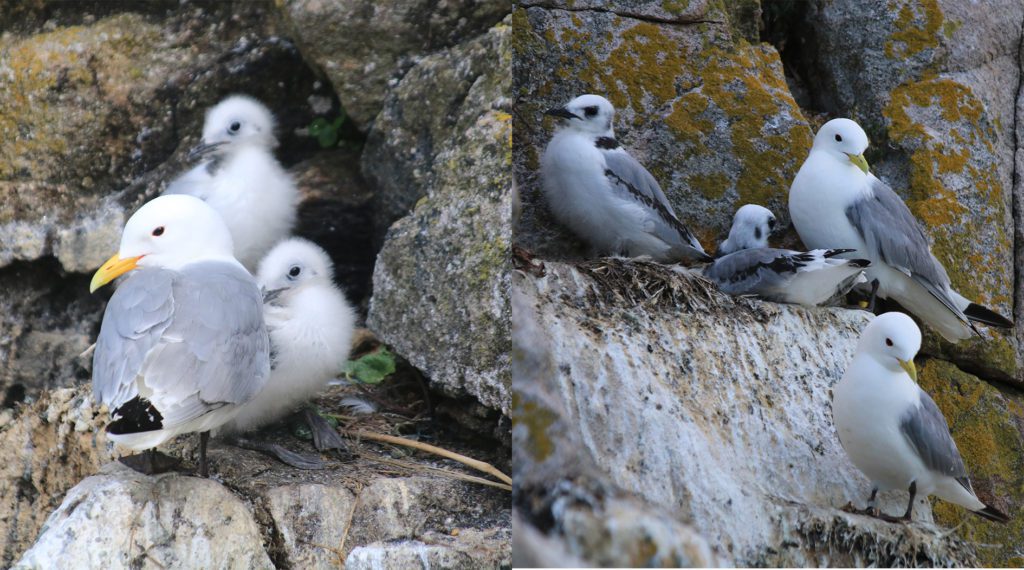 As the tern chicks continued to grow throughout June it wasn’t long before it was time for the annual ringing blitz. While we had each ringed the majority of Roseate and common Tern chicks within our study areas, thousands of chicks still remained to be ringed around the rest of the island. We definitely would not be able to accomplish this with just the three of us. Thankfully, on the 28th of June, we were joined by Dr Stephen Newton, BirdWatch staff Brian Burke and Tara Adcock, and ringers Caroline McKeon and Thorfinn Newton to help us with this daunting task. Bird ringing is strictly licensed in Ireland through both the NPWS and BTO and requires extensive training before licenses are granted! We spent the next 3 days sweeping through each sub-colony of the island, systematically searching every box and nest location to catch and ring every Roseate and Common Tern chick that could be found. Once caught, the chicks were given a uniquely-coded metal ring and Dr. Newton recorded the ring number and other important details including the species, location and wing size (which gives us an idea of how many days old that chick is). Once ringed, the chick was released in its original setting and we moved on with our search. It was a tedious job, but with the help of the volunteers and some good weather, we managed to get the bulk of this ringing completed quickly. 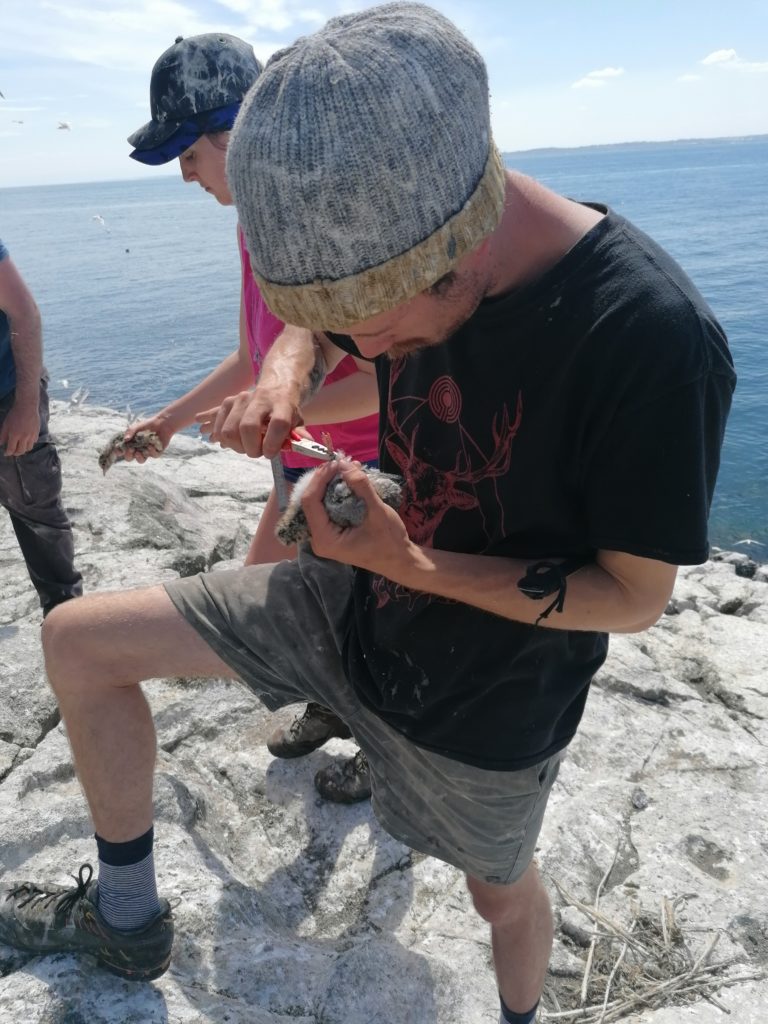 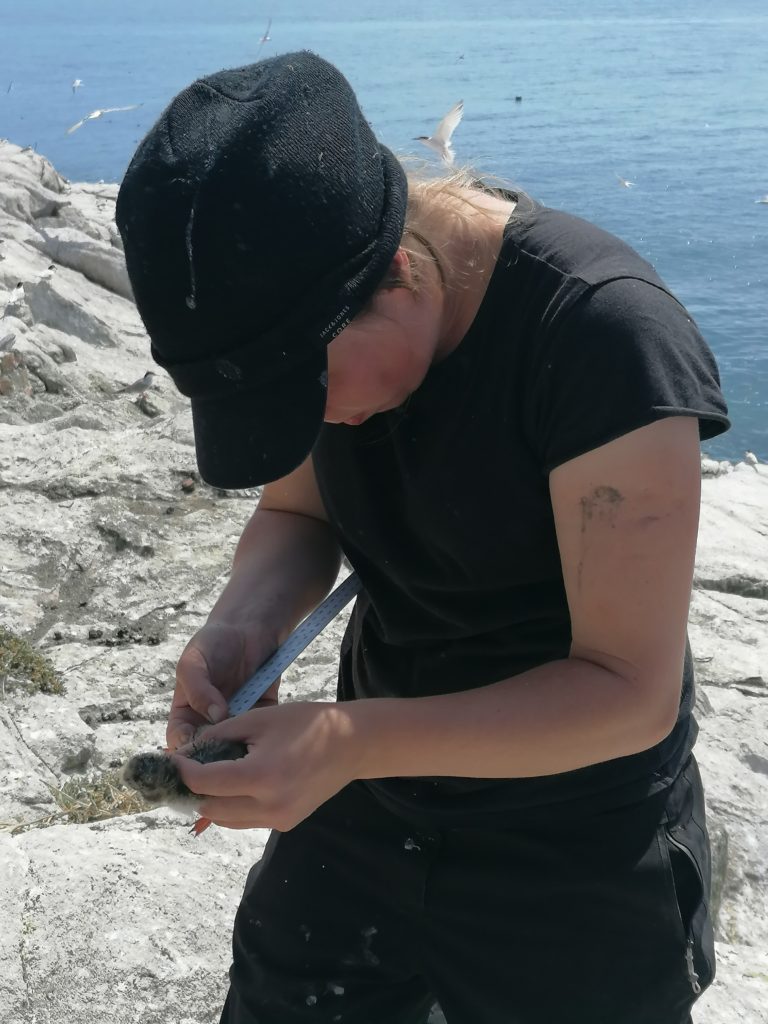 Good News for our Arctic Terns

We are lucky to have thirty-seven Arctic Tern pairs nesting on the Rock this year. In previous breeding seasons, Arctic tern chicks out here have not been very lucky and most nest have been destroyed by either predation or wet weather. However, this year is looking good for our Arctic terns and 17 chicks have fledged. Fifteen Arctic chicks were fitted with BTO and special colour rings. Keep an eye out for some Arctic Terns along the East coast wearing a black ring with 2 white letters on the left leg. 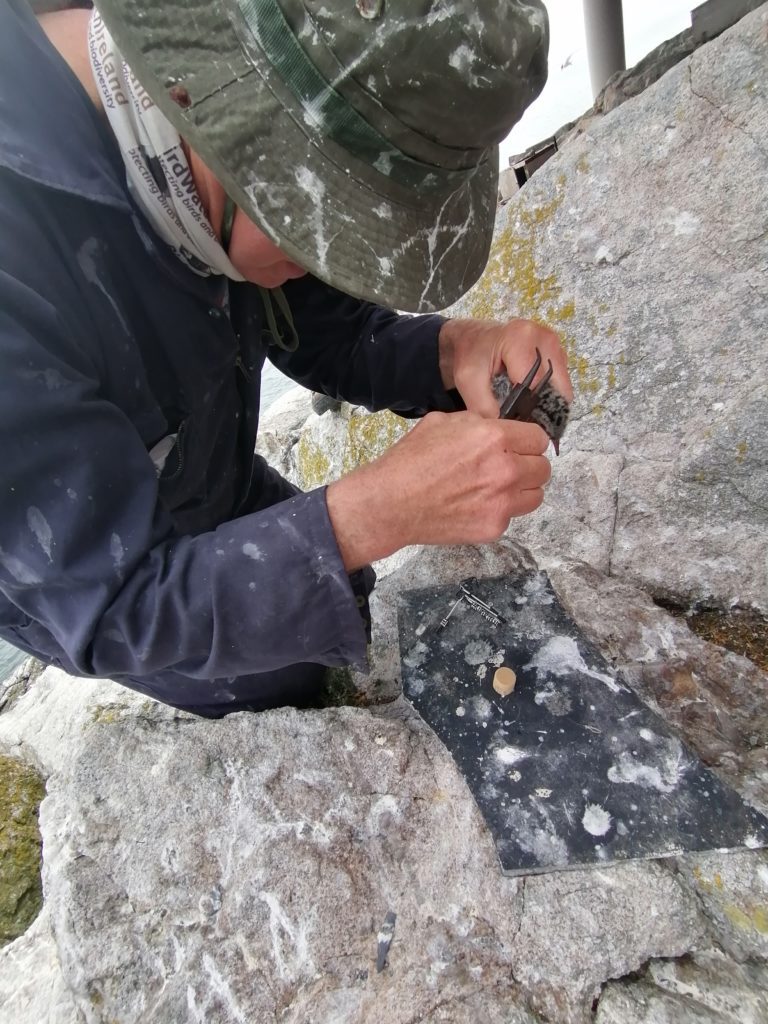 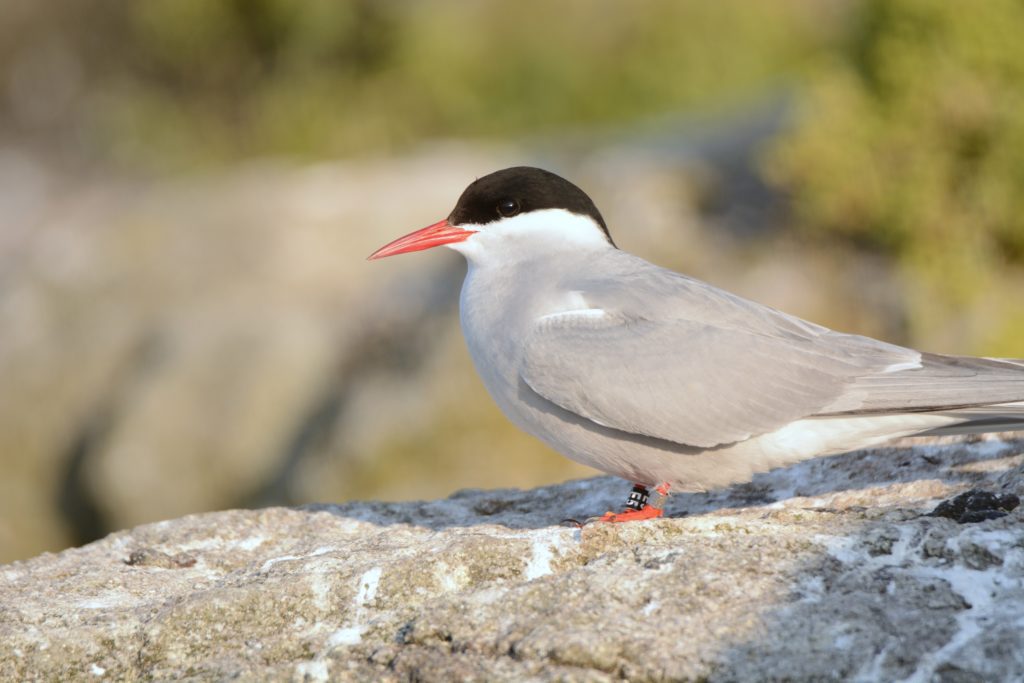 An adult Arctic Tern with a colour ring (black 'E5') on the right leg. Hopefully this years fledglings will return to Rockabill in the coming years! Photo by Brian Burke, taken under NPWS license.

There were more than just Tern chicks to ring however, and with the majority of this work completed we set about catching adult Kittiwakes from the cliff tops on the Rock. Kittiwakes are now globally red-listed, so we’re trying to increase our monitoring of this beautiful gull on Rockabill. As well as ringing them, we also attached GLS tags to each one so that their movements over the next fifteen months could be tracked. All in all, we caught twenty of these beautiful birds over the course of two days. 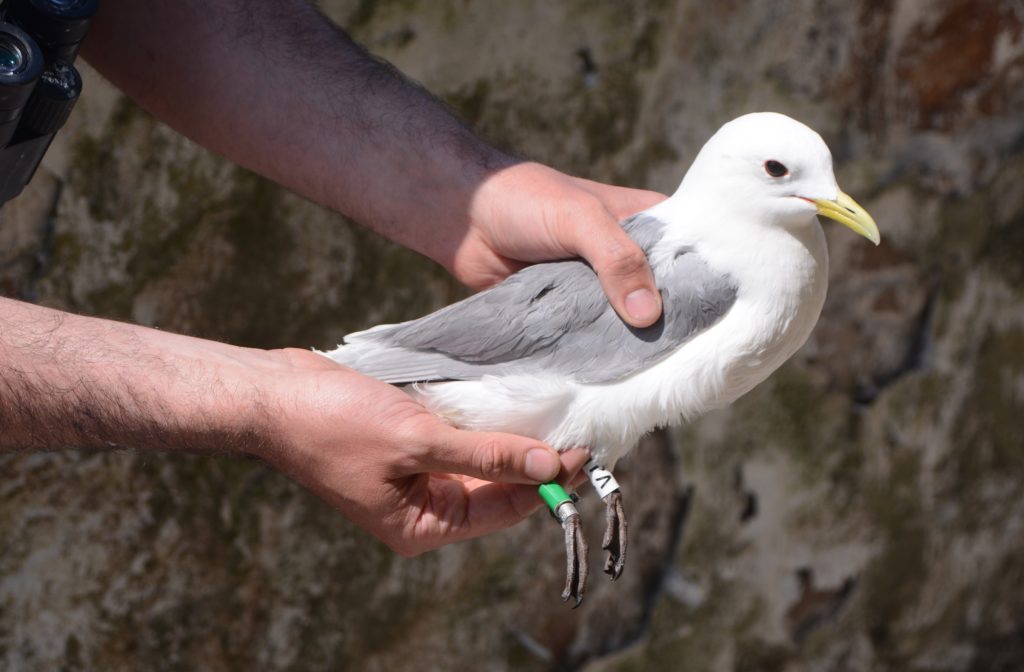 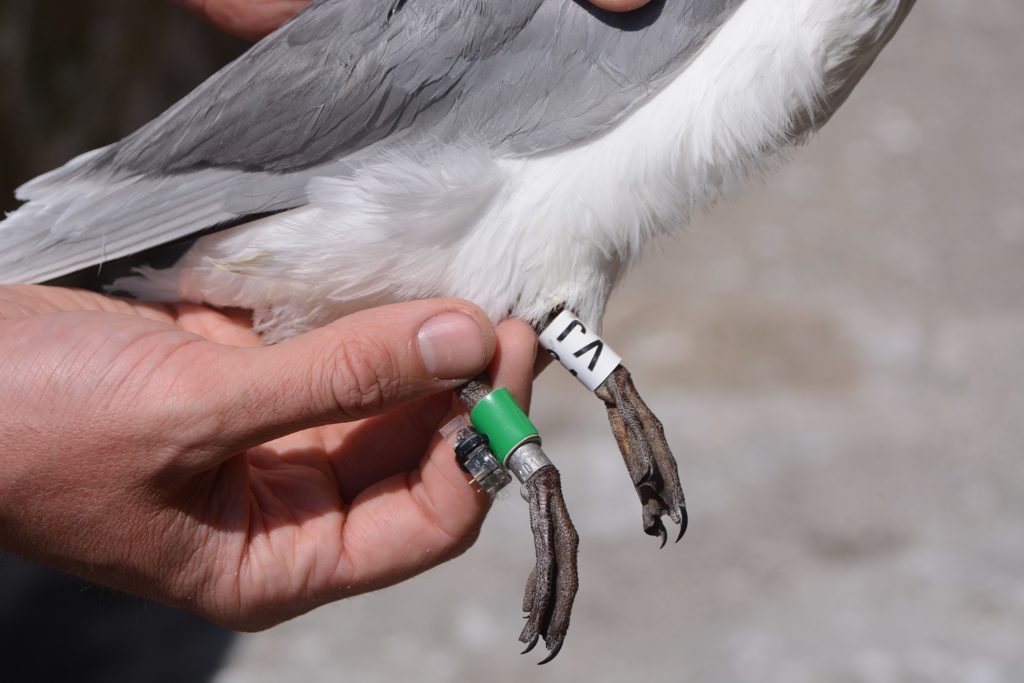 Kittiwake with a GLS tag (on the green ring), plus identifying metal and colour rings, before being released back into the colony. Photo by Brian Burke.

The week concluded with the Steve and the volunteers’ departure, leaving the wardens to look after more and more fledglings by the day. However, we were not left for too long, as a few weeks later it was time to go climbing to ring some Kittiwake chicks. Dr. Stephen Newton returned with work experience student Hannah O’ Connor, who helped us earlier in the season with the nest census, and we set off. As Kittiwakes are cliff nesting seabirds, catching some of the chicks for ringing required some Micheal’s rock climbing expertise. 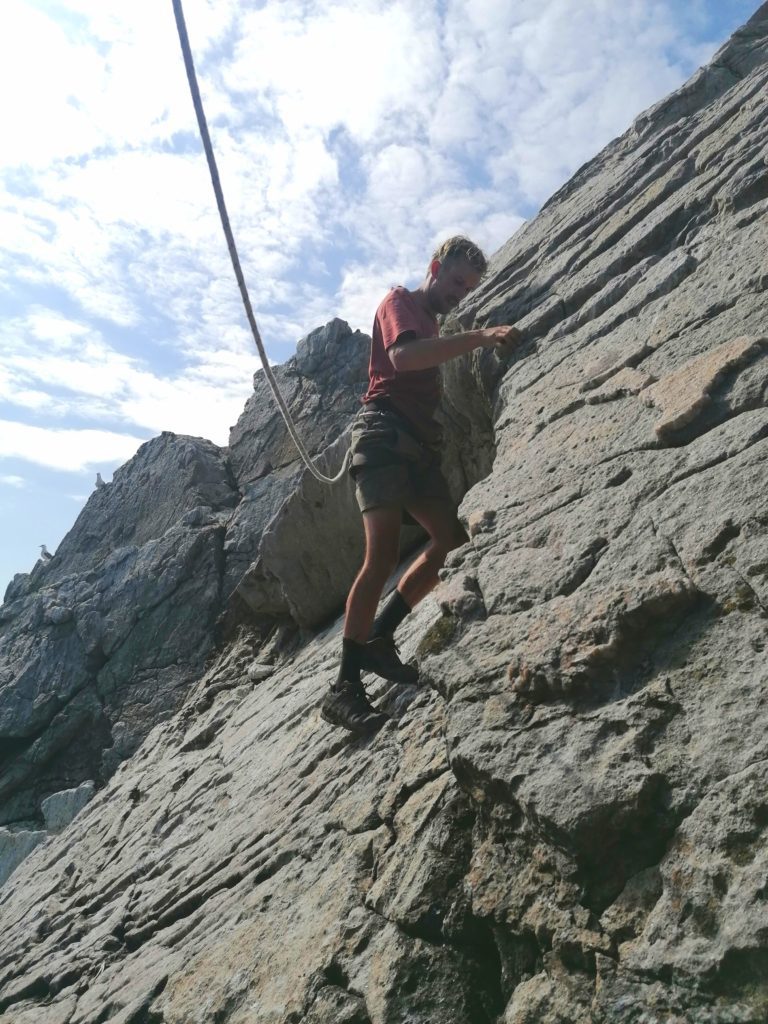 Warden Micheal Fitzgerald has been a keen rock climber for years and was looking forward to climbing cliffs for Kittiwakes, Photo by Emma Tiernan.

We set to work and over the course of two days, we ringed 174 Kittiwake chicks on the Bill and on the Rock. 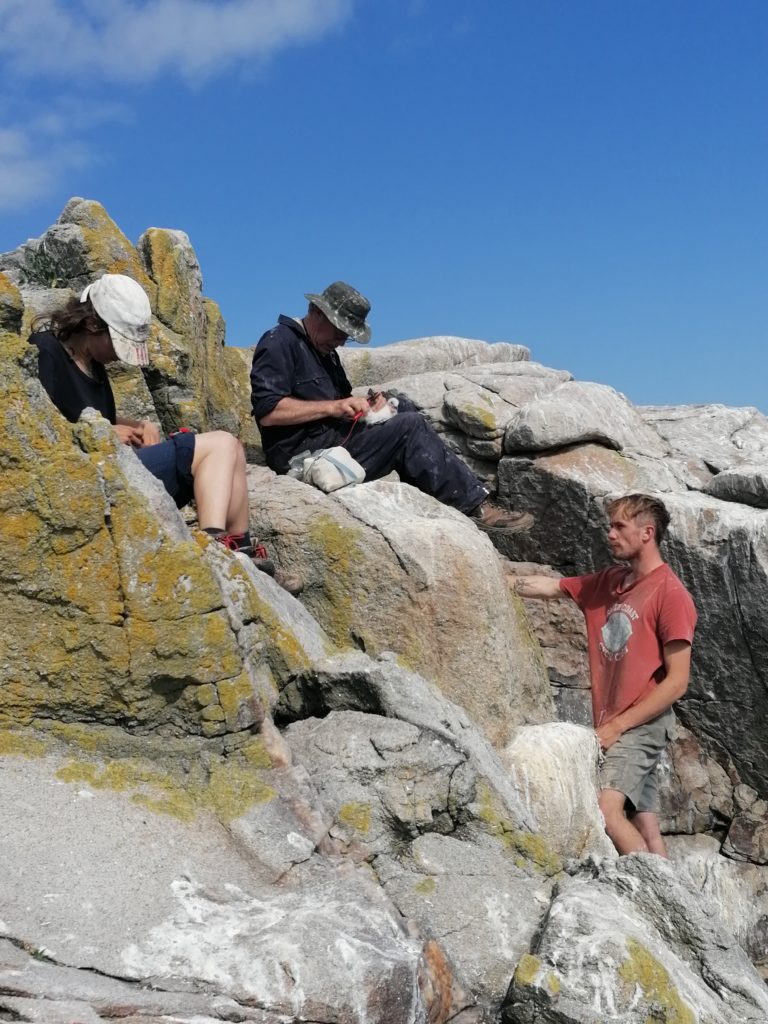 The Rockabill team ringing Kittiwake chicks while Micheal waits to carefully put them back in their nests. Photo by Emma Tiernan, taken under NPWS license.

While its always enjoyable to find fluffy Kittiwake chicks, the work was made a bit more difficult as we worked through the recent heatwave. At the end of each day the wardens and Hannah enjoyed a well-deserved swim in the sea. After a very sweaty few days, it was time for Dr Newton to leave us again and we were once again left to our own devices, this time, however, on an island bustling with teams of busy fledglings, as they took to the air for the first time.

(PS – Don’t forget to keep an eye out for terns roosting around the coast at this time of year, and let us know via the link here)

To find out more about what life is like as a seabird warden on Rockabill island, watch the Rockabill documentary here 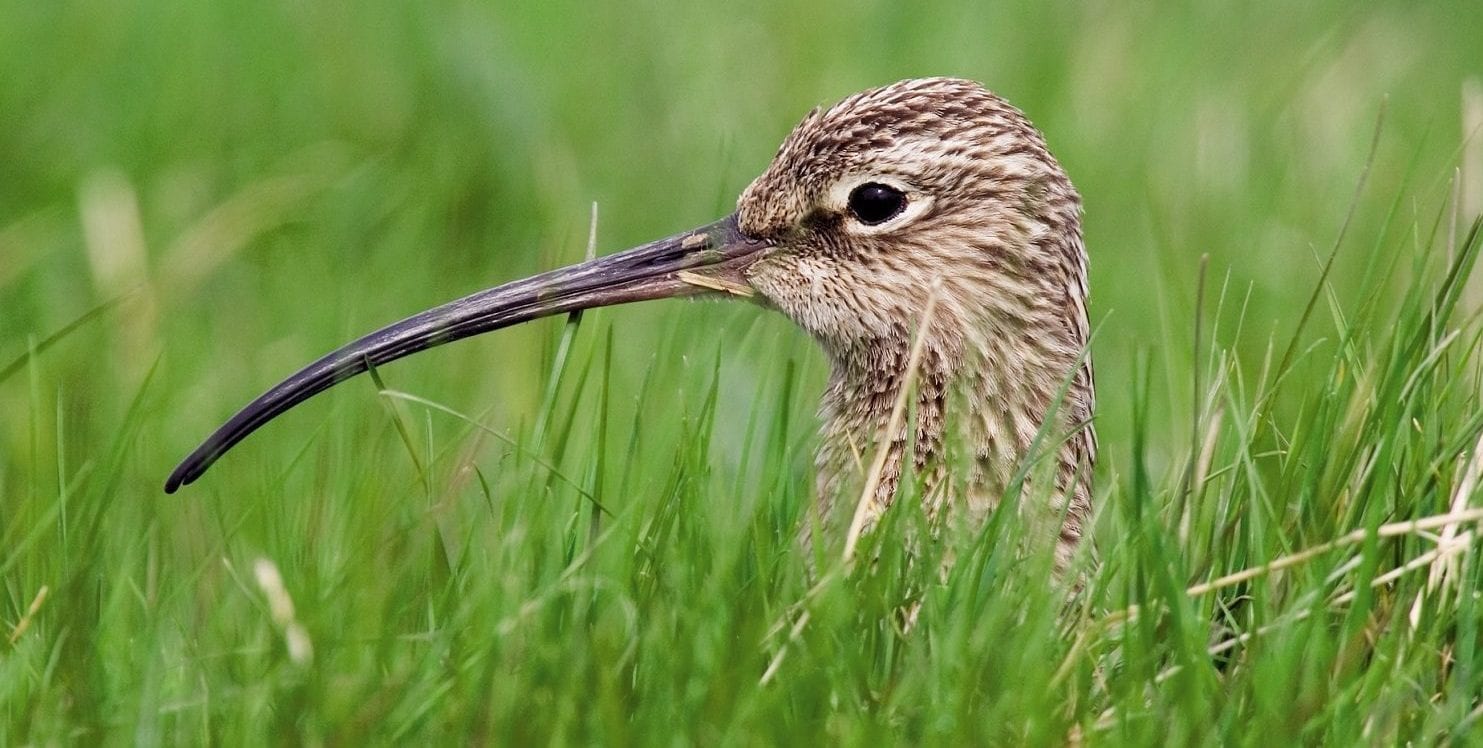 On World Curlew Day, the Curlew is a symbol of successive government failure to protect our wildlife. BirdWatch Ireland’s top scientists are today, on World Curlew Day, meeting Ministers of State Malcolm Noonan and Pippa Hackett to discuss alarming wild bird declines. Experts on farmland birds, waterbirds and seabirds will tell the ministers that successive governments have ignored biodiversity and that they must seize the moment to turn around the fate of so many species. Last week BirdWatch Ireland and RSPB Northern Ireland jointly published the Birds of Conservation Concern in Ireland 2020-2026 list. Using a traffic-light system, it reviewed the conservation status of 211 regularly occurring bird species in Ireland. The findings revealed a shocking 46% increase in the number of bird species on the Red List, the highest threat category, since the last review in 2013. Altogether 63% of bird species on the island of Ireland are now in serious trouble, a truly shameful and unacceptable situation that must urgently be addressed by government. Ministers will hear that the catastrophic declines of farmland birds, especially breeding waders like the Curlew and the Lapwing, are a consequence of successive agriculture and forestry policies which have prioritised intensification and afforestation at the cost of homes for biodiversity. Dr. Anita Donaghy, BirdWatch Ireland Head of Species and Land Management said: “On World Curlew Day we are still waiting on government to implement the recommendations of the Curlew Task Force published in 2019. We cannot delay anymore. “We have reached a tipping point in the future of many of our wild bird populations. The declines in the Kestrel, the beautiful and formerly common farmland bird of prey that hovers while hunting rodents, are grave. They indicate that our countryside is becoming ever more inhospitable for nature. This must be resolved in AgriFood Strategy 2030, the CAP Strategic plan and in the Forestry Programme for once and for all. “Successive governments have targeted funding on intensification and forestry premia, and much less so at supporting farmers to save the habitats of threatened species on their farms.” Dr. Lesley Lewis of BirdWatch Ireland, co-author of the Birds of Conservation Concern in Ireland paper said: “Ireland’s waterbirds are declining at rate higher than those in most other EU member states. Government must now put in place a multilateral and all-of-government approach with biodiversity at the heart of decision making. Otherwise the trend will be for more species to join the Red List and to head for extinction here” Dr. Stephen Newton, BirdWatch Ireland Senior Seabird Conservation Officer said: “Post Brexit, Ireland is the most important EU member state for the 4 Red-listed seabird species Puffin, Razorbill, Kittiwake, and Leach’s Storm Petrel. We must meet national and EU targets to cut emissions and also ensure that offshore renewables safeguard threatened species. To do this we need a lot more funding for research into species ecology”. Oonagh Duggan, BirdWatch Ireland’s Head of Advocacy said: “Failure to adequately fund the National Parks and Wildlife Service has hindered species and habitat conservation at every level. Government ambitions to meet climate targets can be supported by ambitious restoration of habitats, but significantly increased staff numbers and funding is required within the NPWS so it can be fit for purpose for this task." 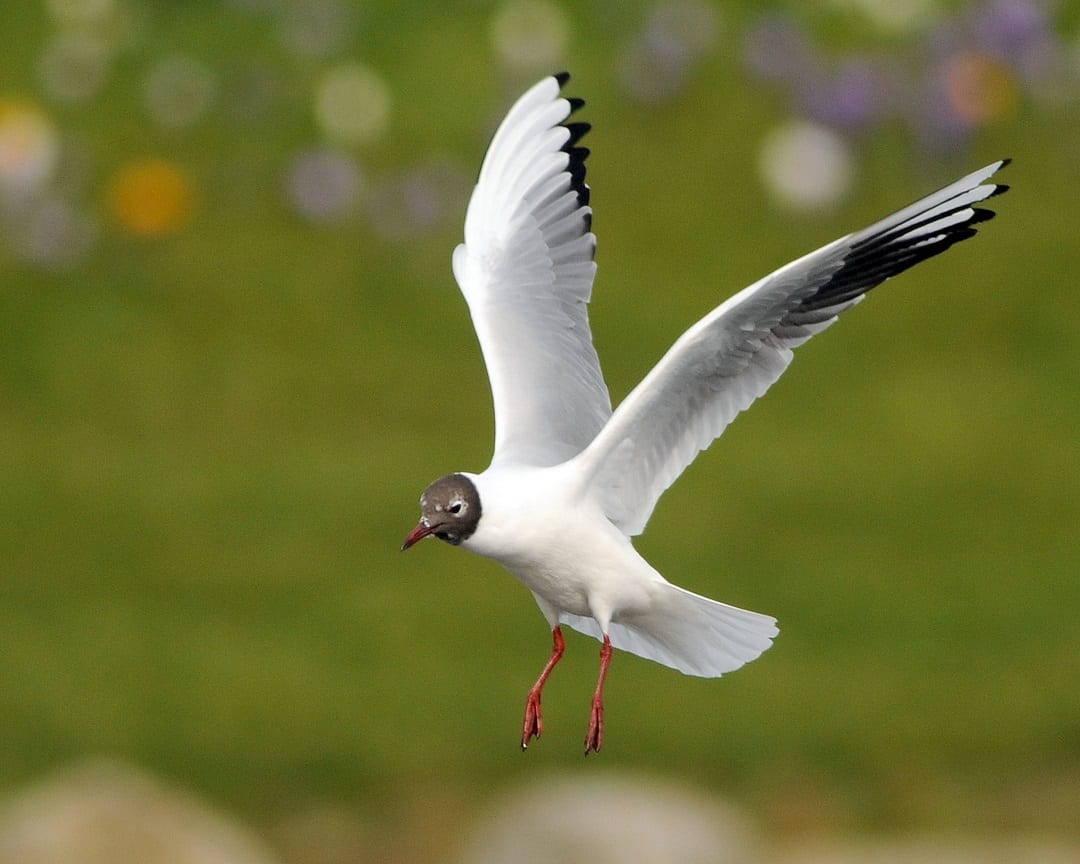