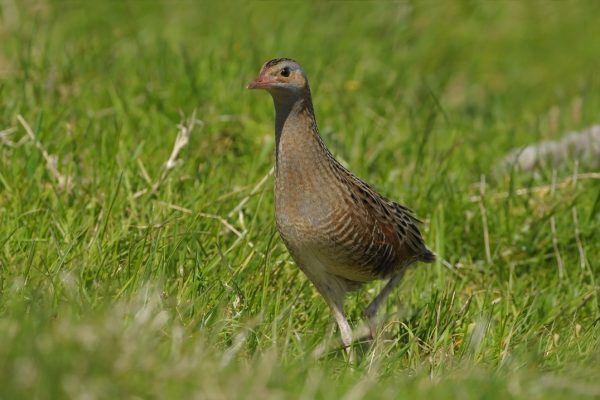 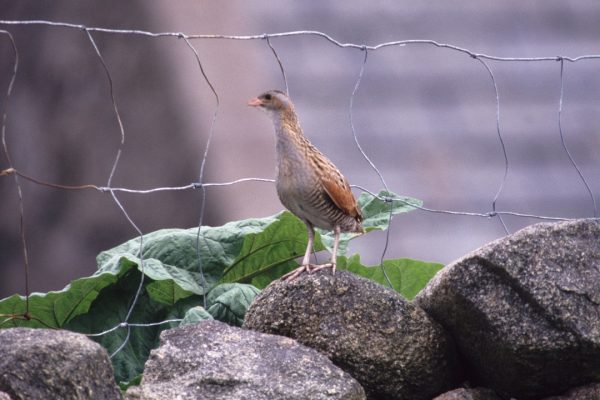 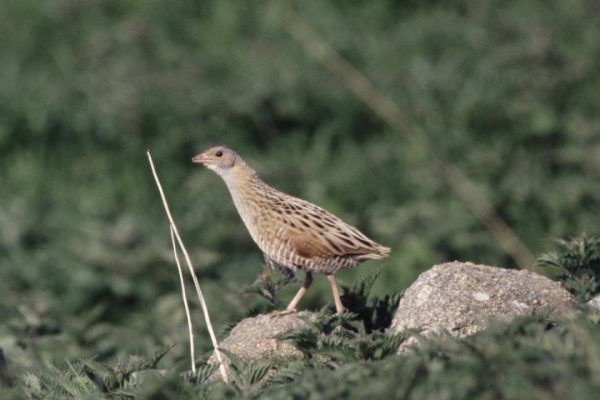 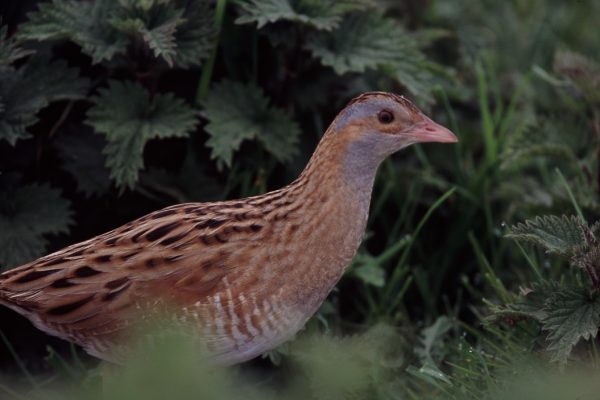 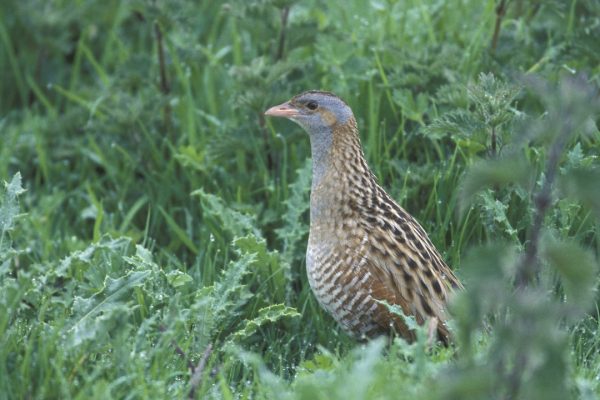 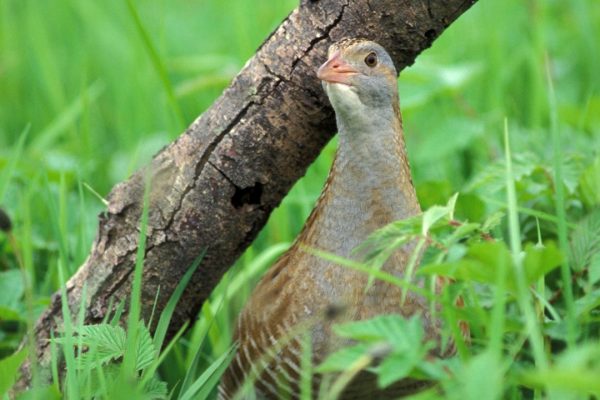 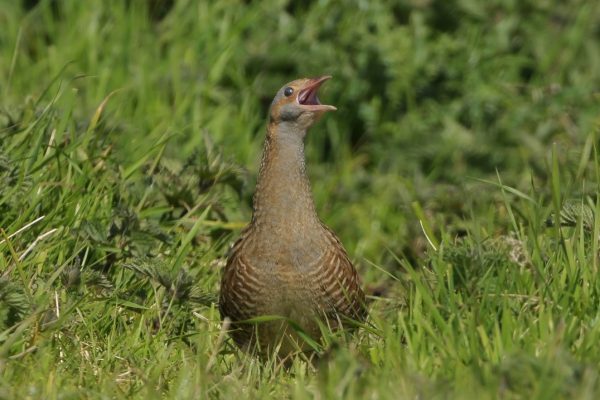 Summer visitor from April to September.

A shy, secretive bird of hay meadows. The distinctive kerrx-kerrx call of the male often being the only indication of their presence. Adults show a brown, streaked crown with blue-grey cheeks and chestnut eye-stripe. Breast buffish grey with chestnut smudges on breast sides. Flanks show chestnut, white and thick black barring, fading on undertail. Wings bright chestnut, striking in flight. Short bill and yellow-brown legs. Prefers to run through thick cover, dropping quickly back into cover when flushed. Flight is weak and floppy. Large bright chestnut patches on wings and dangling legs are distinctive in flight

Males give a very loud, distinctive kerrx-kerrx call during the breeding season, which is repeated during the day in fits and starts, reaches a peak about dusk and continuing through the night till dawn. Its onomatopoeic Latin name seems to be derived from this sound

Breeding is from mid May to early August. Nests on the ground in tall vegetation. Most nests are in hay fields. The greenish-grey mottled eggs hatch after seventeen days of incubation. For the first four days after hatching the chicks are fed by their mother. They then learn rapidly to feed themselves. Flight takes place in a little over thirty days. Females have two broods, the first hatching in mid June and the second one in late July to early August. There can be as little as two weeks between the chicks fledging from the first brood to laying a second clutch.

The kerrx-kerrx sound of the Corncrake has been compared with two cheese-graters rubbed together, producing a sound so monotonous as to qualify the bird as the world's worst singer. This lack in vocal accomplishment is more than compensated for by their dignified operatic deportment as they stand erect with head held high and beak wide open. Corncrake is a misnomer - birds rarely nest in cornfields. Favourite sites are in long grass and amongst tall weeds and damp places.

Formerly a common summer visitor, Corncrakes have suffered drastic population declines this century and are threatened with global extinction. Now only present in small numbers in North Donegal and Western parts of Mayo and Connaught. This decline is due in most part to intensive farming practices including early mowing to make silage and mechanised hay making practices which have destroyed nests and driven Corncrakes from old habitats. Now Corncrakes are confined to areas where difficult terrain precludes the use of machinery and where traditional late haymaking still takes place. 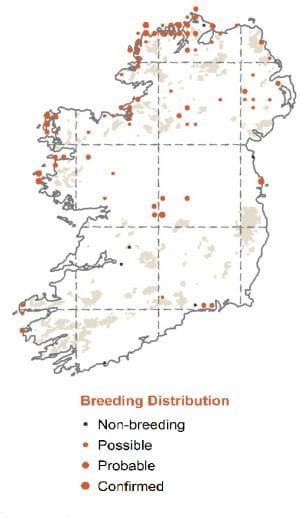 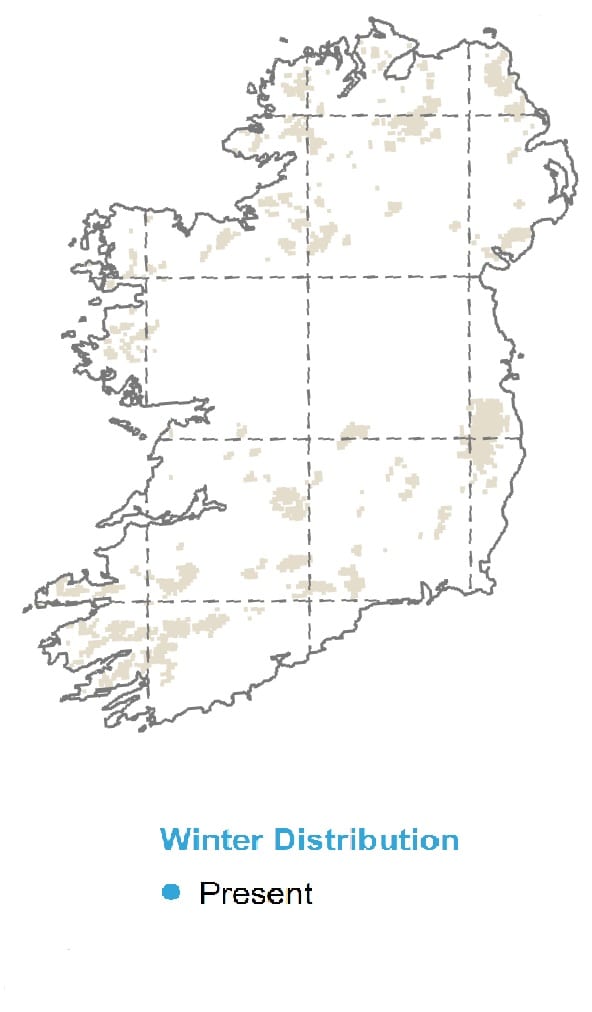 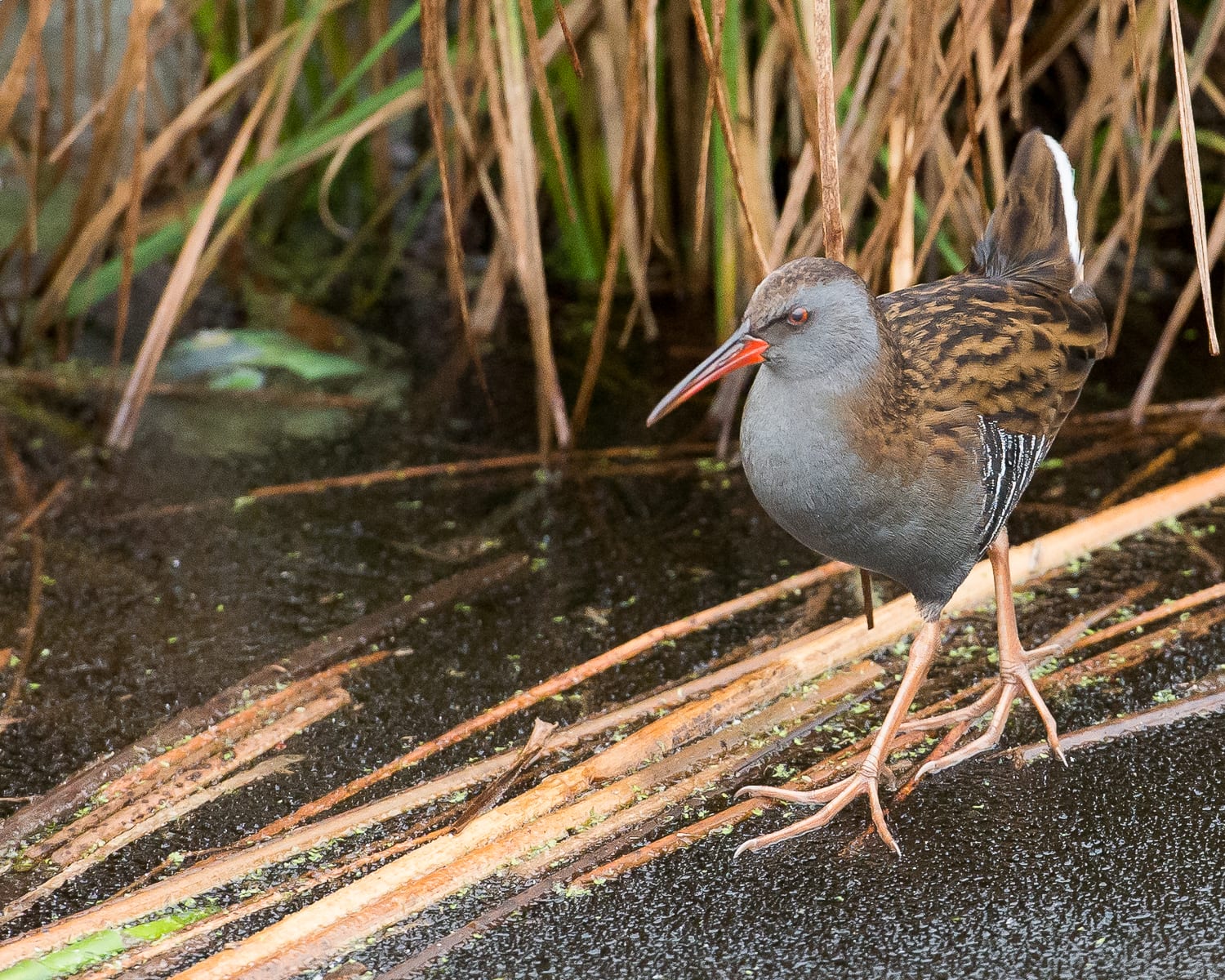