Restoring nature is so important for people, wildlife and for climate change mitigation and adaptation. BirdWatch Ireland is undertaking habitat restoration as part of the Cooperating Across Borders for Biodiversity peatland restoration project, as part of the Curlew European Innovation Partnership and in the past at our reserves. The Irish government has committed to restoring a certain amount of peat habitats in the 2021 Climate Action Plan but so much more needs to be done for habitats, ecosystems and wild birds. Critically, a legally binding nature restoration tool is essential to ensure EU member states follow through on promises and commit funding to projects.

Along with our BirdLife Europe partners, BirdWatch Ireland has been actively pressing for a strong, new law to #RestoreNature at EU level. Recently, we called on our supporters and members to send a letter to European politicians demanding that they stick with the plan to publish the new draft Nature Restoration law this month.

A total of 13,000 European citizens, 166 environmental NGO including BirdWatch Ireland and a group of EU environmental ministers sent letters to the European Commission expressing their support of the law and asking for it not be delayed. But the Commission has done just that and now says that a law will be published before summer 2022 but with no exact date set.

This is the second delay (first one was in January 2021) and it is regrettable as the biodiversity and climate crisis worsens. The news of recent unprecedented temperature increases in the Arctic and the Antarctic is terrifying. The goal of the Nature Restoration law is to create legally binding requirements to restore habitats and in particular those that

Restoring biodiversity is critical not just to secure healthy ecosystems for wild birds, insects and other wildlife but to ensure ecosystems are healthy enough to help us mitigate climate change and to adapt to it.

It appears that the horrific crisis in Ukraine has encouraged lobby groups to use the situation to lobby to force back environmental gains of the last three years and in particular the EU Green Deal which includes the Farm to Fork and the Biodiversity Strategy. In reality, now is the time to accelerate towards the goals of the EU Green Deal as the crisis has shown how vulnerable agriculture in particular is to external shocks due to its very high dependence on fossil fuels and fertiliser inputs. Climate change and biodiversity loss threaten agriculture production in vast areas of Europe. Now is the time to restore nature, not backtrack on it.

In Ireland 85% of our internationally important habitats including peatlands, wetlands and coastal habitats have unfavourable status. They are very degraded and not able to function as they should due to fire, overgrazing, and recreational disturbance in particular. Birds are indicators of the health of the environment, and Irish farmland and upland birds are mostly red or amber listed Birds of Conservation Concern meaning they are seriously threatened and their future as breeding species on this island is a matter of major concern.  Hen Harrier and 12 of the 16 red listed farmland bird species are all ground nesting birds that are highly vulnerable to changes in land use and degradation of habitats. 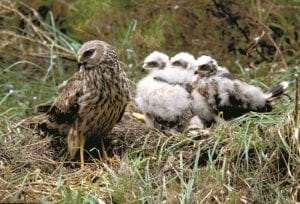 As a member of the BirdLife Europe partnership, we advocated for a strong EU Biodiversity Strategy which was published in 2020. It includes the following ambitious targets for nature:

Thank you to everyone who sent a letter. Every single one of us are advocates for nature and your voice matters now more than ever. It is very disappointing that the European Commission didn’t press ahead with the #RestoreNature law this month. We, along with our colleagues in BirdLife Europe and Central Asia, will be holding the European Commission to account to deliver this critical law for people, biodiversity and to tackle climate breakdown. 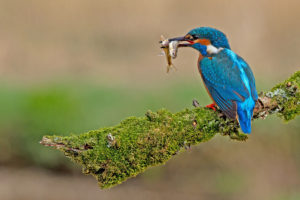 Kingfisher is reliant on healthy rivers to feed itself.