Mark Stanley, who founded the Wexford Barn Owl Project recounts the early stages of the project, why he chose to set it up, the collaborations established and the achievements over the short time the project has been in existence, all of which shows how local efforts and people coming together with the right mindset can make a big difference for biodiversity (and in this case Barn Owls) in their area.

In early summer 2020, I received a phone call from a friend asking me if I could ring a pair of Barn Owl chicks at a farm in Wexford. The caller, Will Warham, knew I was a licenced NPWS/BTO bird ringer but I had to explain that even as a qualified ringer, I wasn’t allowed to handle or ring Barn Owls without an additional licence; this is because Barn Owls are highly protected, a Red-listed Bird of Conservation Concern in Ireland, requiring a specific (Schedule II)  permit.

Eager to help, I spoke to the NPWS and was told that the best thing would be for me to contact John Lusby of BirdWatch Ireland who had a National Barn Owl ringing project already established. This made perfect sense, ensuring project continuity and cooperation throughout the Country. I was duly added to the BirdWatch Ireland licence and within a few days had ringed the small brood of two chicks, the first to be ringed in the County for some years.

With interest aroused and now having a Schedule II permit for Barn Owl, it made sense to see what else could be done in Wexford for this iconic species, where their numbers are lower than in other parts of the Country. It became apparent that although BirdWatch Ireland had been monitoring Barn Owls across Ireland, there remained gaps in Wexford, not least because John and most of the Barn Owl team were based in the west and south-west of Ireland, which is also the area of greatest Barn Owl concentration.

John was keen to have an experienced ringer available in the south-east for Barn Owls and was delighted when I volunteered to try and do more in the County, by raising awareness of the plight of the Barn Owl within the community and by trying to get a network of Barn Owl nest boxes erected – which is a fantastic way of encouraging Barn Owls to breed in suitable areas, with a higher degree of safety, reducing chick mortality rates.

One of my wife’s cousin’s knew of a guy who was interested in owls and birds of prey more generally and I arranged to meet him at a farm where a farmer wanted to put up nest boxes. Colin Travers and his friend (and fellow owl enthusiast) Mylie Finn turned up and we immediately formed a rapport, all of us having an interest in doing what we could for Barn Owls. Within a few short weeks and with donations of timber from farmers and an early donation from Chadwicks in Wexford, we started building and erecting boxes on farms. Colin’s friend Derek Donohoe, a decorator with van and ladders became an essential member of the team and helped us with installations and so we decided that it was time to organise ourselves a bit more. 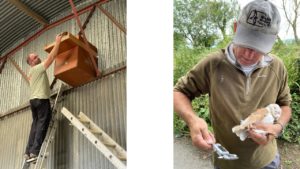 The Wexford Barn Owl Project was formed, specifically as a sub-project of the BirdWatch Ireland initiative run by John Lusby. We created a logo and a friend of Derek’s kindly printed T-shirts for us so that we looked the part when we turned up at farms. I was invited to speak about the project on South East Radio and did two interviews, and our work was also covered by the Wexford People Newspaper and appeared in several local newspapers around the County. I had resisted setting up a Facebook page but I relented and did so at the end of 2020. Things really took off and word soon spread that there was a local team that could provide help and advice to people within the County who wanted to attract and help Barn Owls.

With over 1,000 people following the page, @wexfordbarnowl – we’ve been able to raise awareness of the need for Barn Owl conservation around the County. We’ve also asked for sightings of Barn Owls. It was amazing that we received ten times the number of Barn Owl sightings in Wexford in a nine month period, than had been submitted to BirdWatch Ireland centrally over the preceding ten years..!!

An Ash tree with hollow cavities which is suitable for Barn Owl (left) and a Barn Owl nest in a hollow cavity in a Poplar tree (right) (Photo: John Lusby)

The number of Barn Owl sightings across the County have definitely increased as people have become more aware of Barn Owls and an important area of focus has been the by-pass and motorway network. The final member of the team is Gareth Cahill who works as part of the roads maintenance team. Gareth is often gritting or on call late at night and has been a fantastic source of Barn Owl sightings along the M11 and N30 from Oilgate up to Wicklow.

As 2021 started, requests for boxes came in thick and fast and we created a contact database containing details of people who have offered to make their own boxes and those who have asked us to provide them. We ask for a donation per box which helps us cover our costs, especially as timber has become so expensive.

Catherine McLoughlin, the Heritage Officer at Wexford County Council managed to provide funding and that made a huge difference as we were able to purchase timber, tools and other materials. The ‘Wexford Men’s Shed’ kindly made 18 boxes for us, as have other individuals and Colin, Mylie and even family members have pitched in to cut and assemble boxes. It has required a huge effort, especially as we’re volunteers and people have families and full-time jobs.

The interest in the project and the sheer number of enquiries has been fantastic and at times overwhelming. At least 52 new boxes were erected in 2021 and probably another 30 more than that by landowners independently, with a further 25-30 promised. In addition, we have around 50 people waiting for boxes and we want 150 boxes in-situ by the end of 2022. As things quieten down in the coming years and with a network of boxes installed, we’ll re-survey and visit all the locations.

The summer of 2021 was really special. Two newly erected Barn Owl boxes attracted breeding pairs of Barn Owls within months. Reports of nest sites started coming in and by the end of the breeding season I’d ringed 20 Barn Owls, a ten-fold increase over the previous year. Ringing the birds allows us to monitor their movement, health and lifespan and although ring details are often recovered from birds found dead, especially roadkill, the data is vital in us understanding the population of this species within Ireland.

In addition to nest box installations, ringing, owl rescues and farm visits and surveys, we’ve also tried to involve young people. In 2021 we made four presentations to schools across the County about our conservation work. The young people we speak to are potentially the conservationists of the future and we consider this a really important activity. The presentation, made by Mark, usually takes about forty minutes before Colin introduces ‘Gizmo’ a tame Barn Owl, who flies across the classroom and inevitably ‘steals the show’.

The Wexford Barn Owl Project represents citizen science at its best. We may be volunteers, but our conservation and legal disciplines guide our actions. Too many people fail to realise that Barn Owls cannot be handled or disturbed or even photographed (at the nest) by law. They are susceptible to disturbance and our experience and knowledge enables us to adopt best practise. We are constantly looking to improve our operation through the use of available technology. A good example is the use of thermal imagers for nest box surveys, which allows occupied boxes to be identified without disturbing the birds. 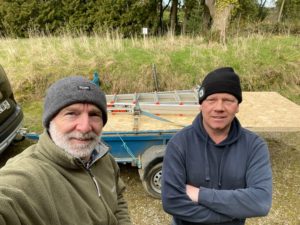 We are looking forward to a busy and successful year in 2022. Together with BirdWatch Ireland we hope to build on the positive relationships formed with landowners, volunteers and Wexford County Council; we’re involved in tying up sponsorship that could provide us with materials for nest boxes and we need to bring in more helpers – people who can help us build and install new boxes. We want to continue with our schools programme and to continue to raise interest and awareness of the majestic Barn Owl. You can also help us by reporting any information on Barn Owls in Wexford, or anywhere in the country by visiting here.

A ruined abbey which is suitable for Barn Owls (left) and a Barn Owl emerging from a ruin at dusk (right) (Photo: Mike Brown)